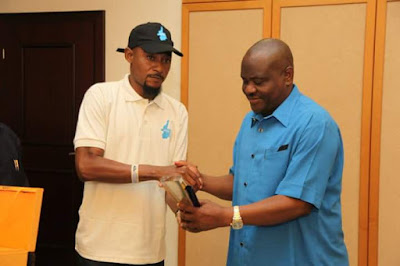 Rivers State Governor, Nyesom Ezenwo Wike has called on Niger-Delta Militants to embrace dialogue as the blowing up of oil facilities is negatively affecting the nation’s economy.

He also accused Nigerian Agip Oil Company of being responsible for some of the conflicts in the area, stating that should Agip continue to act against the security of the state, the state government will revoke the certificate of occupancy of the oil company.
The governor also stated that the destruction of oil installations also damage the environment which will also negatively impact host communities.
He spoke at the Government House, Port Harcourt on Friday when he received the Ogba / Ndoni /Egbema Local Area (ONELGA ) Youths Consultative Council (OYCC).
He said that should the oil production continue to drop, the nation will face crisis, hence the need for the restoration of peace through negotiation and dialogue.
He said : “If the oil production continues to drop, this country will be in crisis. Blowing up oil facilities also has negative effect on our environment. There is need for the dialogue to go on.
“I believe in one united Nigeria and it is in our interest to have peace for development “.
Governor Wike added that the Niger Delta State Governors should be involved in the the process for the award of pipeline contracts for the identification of clean groups without links to cultists.
He commended the OYCC for promoting peace in ONELGA, which is the highest oil producing local government in the country.
The governor assured the people of ONELGA that his administration will execute more development projects in the area. He added that the people also benefit from the the entrepreneurial loan scheme of his administration for small businesses.
Earlier, President of OYCC, Mr Kingsley Ogumike praised Governor Wike for executing developmental projects in the area and appointing indigenes of the area into key positions.
They appealed to the governor to always invest in the security of the local government area. He assured the governor of the support of the youths in the area.