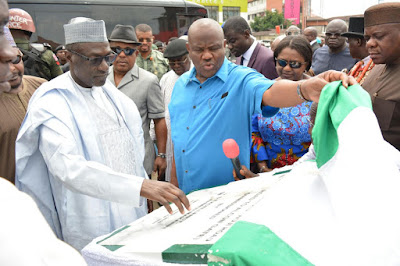 The  Caretaker Committee Chairman of the Peoples Democratic Party, PDP, Senator Ahmed Makarfi has declared that Governor  Wike  has proved to be an outstanding  governor who churns out projects, pays salaries and pensions,  when other states are failing.

Also, Rivers State Governor,  Nyesom Ezenwo Wike  assured  the people  of  the state  that he will maintain  the  tempo  of  projects delivery  and initiation of pro-people  programmes.

Commissioning the road, Caretaker Committee Chairman of the Peoples Democratic Party, PDP, Senator Ahmed Makarfi said: “Most of  what we hear from other states is that they cannot pay salary or pension. But what we hear from Rivers State is dignitaries coming to commission projects.

The National Caretaker Committee Chairman of the PDP said that  if elections are conducted 1million times in the state, Governor Wike will emerge victorious  because  of  his pro-people  leadership.

He said  that  the  Dr Frank Eke Road he commissioned was executed  in line with  international  standards, stressing  that it will be of benefit  to  the  people.

He said  that  the  leaders of  the  party  are working  to consolidate on the unity within the PDP.

In his address,  Rivers State Governor,  Nyesom Ezenwo Wike  stated that his decision to reconstruct  the  Eze Dr Frank Eke Road was as a result  of  the  pledge he made will campaigning in the area.

He said the road was awarded by the immediate past administration which failed to mobilise  the  contractor.

He said  that  the  Peoples  Democratic Party  is the only party that keeps its promises. He said while others give excuses, the PDP and her officials deliver.

He said: “There  is  no  more crisis in the PDP.  That is why the Caretaker Committee Chairman  is here to commission  this project.”

Also  speaking,  the  Works Commissioner,  Mr Bathuel Iheanyichukwu stated  that  the  ministry  is happy  to  be associated with  a governor  that is performing.
He said that the road is 4.7kilometer in length  and has created access to several  areas in the local government area.

The commissioning  of  the  road attracted thousands  of  residents  and  traditional  rulers  from Woji Town.

PHOTONEWS: Are you Ready?