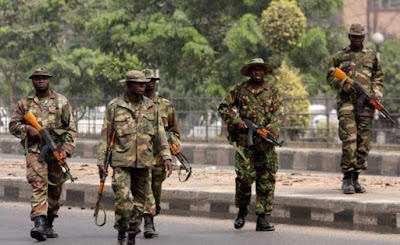 The affected officers, according to the council, are retired for their involvement in arms procurement under the Goodluck Jonathan administration and their role in the 2015 general elections.

The Acting Director, Army Public Relations, Col. Sani Usman, said in a statement on Saturday that a large number of the senior officers were retired from the service on Friday.

Usman did not give the exact number of those affected. Sources, however, disclosed to our correspondent that no fewer than 60 senior officers of the Army were affected by the exercise.

Usman quoted service exigencies as the reason for the decision by Army authorities to approve the purge in the service.

He recalled that the service recently probed the activities of some officers in the 2015 election.

He also recalled that some officers of the service had been arraigned in court, following the outcome of the investigation by the presidential committee probing defence contracts in the country.

“Those retired were mainly some major generals, brigadier generals, colonels, lieutenant colonels and a major.

“Their retirement was based on service exigencies. It should be recalled that not too long ago some officers were investigated for being partisan during the 2015 general elections.

“Similarly, the investigation by the presidential committee investigating defence contracts revealed a lot. Some officers have already been arraigned in court by the Economic and Financial Crimes Commission.”

He urged members of the public not to read the current move out of context as the military must remain apolitical at all times.

He said the decision by the government to retire the affected officers should be supported by all.

However, a source, who confided in our correspondent, said a number of those mentioned in connection with the procurement of defence equipment and those found to have played some questionable roles in the 2015 election were affected.

The EFCC had in February detained and interrogated some army officers including Adegbe and Achinze.

They were detained and quizzed in connection with the ongoing probe into the alleged arms procurement scandal by Dasuki. Both of them were released after filing separate suits against their detention.

Also, a panel set up by the Army had in January indicted 92 officers over their roles in the 2015 general elections.

The panel report specifically recommended that two officers amongst the indicted soldiers were to be retired at once, while three were to lose their immediate commands.

Submitting the report at the Army Headquarters Abuja, the Chairman of the investigation team, Maj.-Gen. Adeniyi Oyebade, who is the GOC 1 Division, had said a thorough job was done before the recommendations were made.

Night or day, when is sex most ideal?