Home Uncategorized I will never disappoint you, Ikpeazu tells Abians
Spread the post 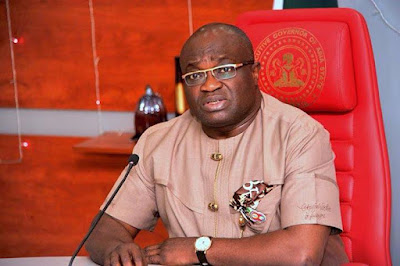 Abia State Governor, Dr Okezie Ikpeazu has promised that he will not disappoint Abians, stressing that he will commence massive rehabilitation of rural roads in the second year of his administration.

The Governor said this in Ohafia and Isiukwuato during a town-hall meeting for Abia North Senatorial District, where he is also promised to commence the construction of the Ohafia-Udumeze Golf Course and Event Centre.

“I’ve come to you as the owners of the mandate I am holding in trust, to report back to you what we’ve done in the first one year, as your steward, and also unveil our plans and things we want to do as we have entered the second year.

“As your Governor, let me reassure you that I will never disappoint you. I will not fail you. Despite the economic downturn in the country, we have not relented on the promises we made to you, when we came to you, asking for your votes.

“We promised to address the issue of road infrastructure, so far we have completed and commissioned 32 roads across the state. And work is still ongoing on 30 roads across Abia. Let  me say it here again that our roads have minimum lifespan of 10 years, that’s why we are using the cement technology on most of our roads.

“We are interested in the economy of Abia, that’s why we are doing more roads in Aba, because Aba will drive the economy of our state. But in this second year we shall focus on rural roads. The idea  is to ensure that what we produce in our farms in our villages and communities can be transported easily to the cities.”

Governor Ikpeazu, while responding to a question, called on Abia youths to acquire relevant a skills, and also get involved in agriculture.

“Let me use this opportunity to appeal and call on youths of Abia to go and learn handiwork. This is the time to develop skills. As you read for your certificates, also develop a skill.

“Think of agriculture, it’s the way to go. Let us go back to agriculture. I’m going back to farming, so I invite you to join me.”

Speaking in his closing remarks, the Secretary of  People’s Democratic Party (PDP) Board of Trustees, Chief Ojo Maduekwe, commended the governor and charged him to continue with his good works in the state.