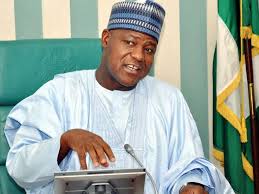 The Speaker of the House of Representatives, Mr. Yakubu Dogara, said on Sunday that the exit of former President Yahya Jammeh of The Gambia from power was an indication that there was no more room for “tyrants and dictators” in Africa.

Dogara noted that it was proof of the fact that democracy was all about the wish of the people and not the might of tyrants.
The Speaker specifically commended President Muhammadu Buhari and other leaders of the Economic Community of West African States for deploying diplomacy backed by military support to compel Jammeh to relinquish power on Saturday.
By intervening in what could have become a major political crisis in the small West African country, Dogara observed that Buhari and the other leaders had saved many lives.
“The leaders have demonstrated their readiness and strong resolve to defend democracy on the continent. This would send strong signals to the world that democracy has come to stay in Africa.
There is no room any longer for tyrants and dictators on the continent,” a statement by his spokesperson, Mr. Turaki Hassan, quoted him as saying on Sunday.
Dogara added that democracy remained the best form of government since it was about the “will and consent of the governed.”
Jammeh had been defeated by his successor, Mr. Adama Barrow, in the December 1 presidential poll held in The Gambia.
The former dictator had accepted defeat and congratulated Barrow only to make a U-turn a few days later.
Jammeh went to court to contest the result of the poll, saying he would remain in office until the determination of the case.
But ECOWAS leaders and other international bodies, including the United Nations, mounted pressure on him to leave office in a bid to avert a crisis.
Jammeh held on to power till the January 19 inauguration of Barrow, which incidentally took place in neighbouring Senegal.
As ECOWAS military forces set to move into Gambia to flush him out, Jammeh stepped down and went into exile.
Source: punch

Why Nigerians are not paying for electricity – Expert