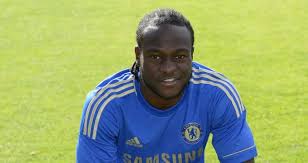 Marcos Alonso has heaped praise on Victor Moses for the impact he has had in Antonio Conte’s Chelsea team this season.
Moses has been a regular fixture in the Chelsea team this term and has earned plenty of praise for his performances in the Blues’ new 3-4-3 formation.
The Nigeria international had previously struggled to make much of an impact at Stamford Bridge but seems to have been given a new lease of life under Conte this season.
And Alonso has paid tribute to Moses and the impact he has had at Chelsea so far this term in helping the Blues top the Premier League table.
Speaking to Chelsea’s website, Alonso said,  “I think it is a good balance for the team.
“There was no need for us to talk to each other before about what we were going to do. A lot of games he goes more forward and I maybe stay more at the back, but that also depends on how the other team plays and it’s good to have variation and different options.
“Victor is doing a great job and hopefully we can keep helping the team as we have been doing in the previous games.”
Chelsea are looking to win the Premier League title this season after the disappointment of their 10th-placed finish in the top flight last term.
The Blues are the firm favourites to lift the trophy in May after their strong start to the season.
Source: punch