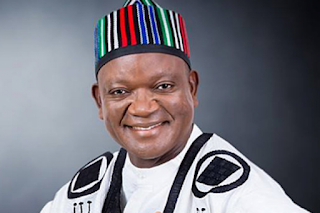 He also wished president Muhammdu Buhari good health and safe return to the country at the end of his vacation in London.
Ortom is the first governor to publicly declare his support to the Acting President in a manner so unusual since President Buhari jetted out on January 19, 2017 for holiday.
While condemning the rumored death of president Buhari, Ortom also believed it was the Will of God for the president to be in charge of Nigeria’s affairs at this time.
He also charged Nigerians especially political leaders to always refrain from breaking the laws of the land.
The governor who just returned from an investment trip in South Africa fielded questions from State House Correspondents after the meeting with Osinbajo which as usual held behind closed doors.
He said: “Well, today is to pay solidarity to the Acting President of the Federal Republic of Nigeria and to pledge my loyalty and best wishes to him and to wish Mr. President, who is on vacation, good health and safe return back to continue to lead us. And we pray that God will continue to help this administration that came at a time that Nigeria is passing through recession occasioned by bad leadership by past administration. And to say that those that are wishing Mr. President death should go and confront God who brought Mr. President to be President of Nigeria. It wasn’t his making.
“When that time came, God made it possible, just like some of us, it was God that made it possible for us to be here and nobody can remove us until the time that God’s programme for Nigeria is completed and God decides what to do next. And to say for me as Governor of Benue State and a major stakeholder of this country, I will continue to implore our people to be law-abiding and always do things that are right because it is the law that is protecting all of us, the strong, weak and whoever.
“But when we as leaders begin to champion the course of disobeying the laws of the land, then we are calling for anarchy, which will not be good for any Nigerian. Nigeria is the only country we have. Definitely, we don’t want to be like Syria and other countries that have gotten themselves entangled in various calamities. Gov Samuel Ortom
“And I want to implore those who are bestowed with leadership, especially those who have taken oath of office, to obey the laws of the land, to protect the laws of the land and to live by the oath of office they have taken instead of playing politics of extreme and causing things that can bring major disaster to our country.”
On ceding part of Benue state to Fulani herdsmen for grazing, the governor accused his political enemies of inciting the people against his government.
“It is not the people who are saying this. The people who are saying this are outside Agatu people. This was a peace pact that was brokered by the Agatu people and the Fulani herdsmen. And myself and Governor of Nassarawa State were there to moderate and allow them. And the insinuation that part of the land was conceded to Fulani is false. It is being instigated by our political opponents who have nothing to sell the people. They want to use that to instigate the people against our government.But the cannot because we are sincere, God-fearing and truthful. We have ensured there is peace in our land.
“As I talk to you, in my own local government, the herdsmen are moving freely. But they are being monitored and relating with the farmers very well. In 2013, my house was raised down in one day alone and more than 50 of my kins men were killed and my rice farm was burnt. But since I came in as a governor, I have brokered this peace and everything is moving on well. The Agatu people told us they are tired of the crisis and want to live a normal life. And for those Fulani herdsmen who were born and bred in Agatu land should come back and live with them.
“But the foreign herdsmen who are violent and been causing destruction should not come near their territory. This was an understanding between two groups. It is not that any land was ceded to any Fulani herdsman and all that. But the truth of the matter is that we must learn to be peaceful. It is only when we have peace that we can begin to improve our states, local governments and the country. When there is violence, we don’t know the extent that can take us.
“So it is false, it was perpetuated by those who want to run our government down. I can assure you that we are on ground and we are working with the people and the people are working with us. We will always be there to protect their interest”, he said. Speaking on the success of his recent trip to South Africa, Ortom said that some investors who indicated interest in agriculture would be coming to visit him in February.“Very successful, I must say that I went there on invitation of some of our investors who are in South Africa and we are looking at investing in agriculture taking on the entire value chain from seedling to cropping to harvesting to storage to processing and to marketing. And I have gotten quite a number of them who will be visiting me third week of February.
“And I believe a lot of good things will come out of that. And my state is also endowed with solid minerals. Just needed the exploration, which I have gotten investors who are going to do this and thereafter go into processing of these solid minerals”, he said.
Source :BNN

JUST IN: Amaechi sworn in as Minister of the Fed.Rep. of...

A Reader Sent Me This Mail Yesterday