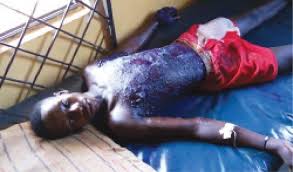 The Enugu State Police Command has confirmed the death of a pregnant woman and her son in a kerosene explosion in the Ngenevu area of Coal Camp in Enugu metropolis.

The command’s spokesman, Mr Ebere Amaraizu, said this in a statement issued to the News Agency of Nigeria on Thursday in Enugu.
Amaraizu said the incident occurred at about 7.30pm on January 30, 2017, after a kerosene lantern exploded.
He said other family members, who sustained burns, had been hospitalised.
“It was gathered that on the day, one Hillary Ugwuoke had allegedly bought kerosene from a neighbour.
“He later poured the kerosene into the lantern and in the attempt to light up the lantern, the kerosene exploded and he house was engulfed in flames.
“Hillary Ugwuoke, his pregnant wife and his children were burnt in the inferno; but sympathisers took them to the National Orthopaedic Hospital, Enugu.
“It was further gathered that at the hospital, Mrs. Ugwuoke and her four-year-old son were confirmed dead.
“Other members of the family who sustained severe burns are receiving treatment,’’ he said.
Amaraizu said investigation had begun into the incident.
Source: punch

You can’t handle the consequences of not restructuring Nigeria — Ayo...