Home Uncategorized Why I dissolved the last Rivers Road Maintenance Agency by ...
Spread the post 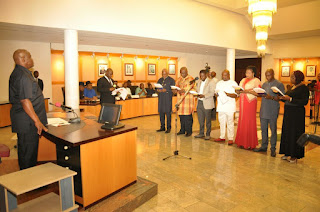 Rivers State Governor, Nyesom Ezenwo Wike has explained  that he dissolved the last Rivers Road Maintenance Agency because  the agency deviated from its core mandate.

Speaking after the inauguration and swearing- in of the new Rivers Road Maintenance Agency at the Government House, Port Harcourt on Monday, Governor Wike advised the chairman and members of the agency  to strictly  adhere  to their laid down responsibilities.
The governor  said  that the primary function of the agency  is  to ensure that  potholes are eliminated from the streets  of  the urban areas.
He also warned the chairman and  members of the agency  to  avoid in-fighting  so that they can easily  deliver  on their responsibilities.
Governor Wike said: “The former agency  went about awarding contracts , which was out of their core mandate.  This agency  is not expected to do road construction.
“Road construction  is for the Ministry of Works and Special Projects bureau.  You are here to  fill potholes  and ensure that roads are motorable”.
The governor  advised the reconstituted  Rivers State Road Maintenance Agency against allowing external influence  determine  their actions.
He further warned that acts of financial  impropriety and in-fighting  would be met with the dissolution  of the agency.
“Take this as an opportunity  to  serve the state. I don’t want to  see potholes anywhere.  This is a direct labour  agency.  If you deviate, you will be dissolved”, he said.
Responding, Chairman of the Rivers Road Maintenance Agency, Mr Sam Agwor said the reconstituted  agency will deliver  in line with the expectations  of the governor.
Governor Wike swore in the following as chairman and members of the Rivers State Road Maintenance Agency:  Surveyor Sam Agwor   —-Chairman, Mr Clapton Ogolo         —-Secretary, Mr. Peter Abbey            —Member, Mr Ability  Nweke           –Member,Madam Kate Ngbarna    -Member,  Mr. Kinikanwo Amadi     –Member and Mrs Queen Anthony        –Member