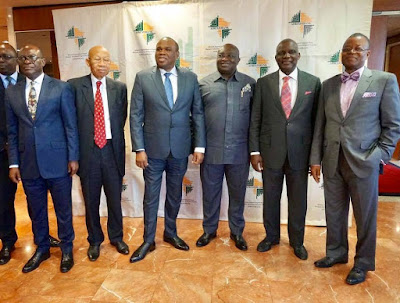 Abia State Governor, Dr. Okezie Victor Ikpeazu, has taken his drive for rapid development of Abia State to the African Export-Import Bank (Afreximbank) President in Cairo, Egypt, where he led a team of  Private Sector Investment Partners to a one day meeting with he bank.

According to a release by the Chief Press Secretary to the Governor, Enyinnaya Appolos, the Governor Ikpeazu who has returned to Nigeria after the One day meeting, had on his team to Cairo some private sector investors, including Prof Barth Nnaji – the CEO of Geometrics Power, Mr. Darl Uzu , MD Crown Realities Plc.,  the lead promoters of the Enyimba Free Trade Zone project and Dr Pascal Dozie, Chairman of Diamond Bank Plc.

The meeting which was at the invitation of the  Afreximbank President, Dr. Benedict Okey Oramah, discussed partnership opportunities in the development of the Enyimba Free Trade Zone Project and completion of Geometric Power project at Aba, amongst others.

It will be recalled that the Enyimba Free Trade agreement was signed on the 27th of January between the Abia State Government and Crown Realties Plc.

The Cairo meeting is therefore a major step forward towards realizing the project while the Geometric Power Project, which is 95% completed, was identified by the Ikpeazu led Government as a key driver for Aba and Abia economic growth.

At the meeting, Governor Ikpeazu discussed investment
opportunities in Abia state and also highlighted the resources his government has put in place to support business growth and expansion in the state.

The Governor emphasized that it was  the vision of the Abia State Government to re-ignite the Industrial potentials of Aba, leveraging its competitive advantage in trade and commerce with centralized location that makes access to all south east and south south cities easy.

According to the Governor, “the planned Aba Industrial Park Project aims to help Aba capture available windows of opportunities by achieving quick wins in the Leather, Garment, Metal Fabrication industries and also attract export oriented light manufacturing firms that will ultimately create a snowballing effect in the re-ignition of the Nigerian economy.”

In his response, the President of  Afreximbank, Dr. Okey Oramah, stated that the development of Industrial Parks and constant power supply were in line with the  bank’s strategic investment thrust.

He affirmed that good infrastructure is critical to manufacturing and promised that Afreximbank will partner with Abia State in the development of Industrial Parks and Electricity Infrastructure.

Dr. Oramah also stated that Afreximbank is also in support of the emergence of Export Trading Companies and development of standard certification centers to support export promotion.

Founded in 1993, African Export–Import Bank, also referred to as Afreximbank, is an International financial institution, headquartered in Cairo, Egypt, with primary objective of promoting and financing trade within the African continent as well as trade between Africa and other continents.