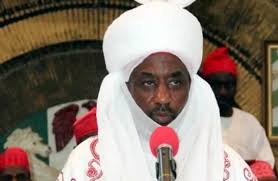 The Emir of Kano, Mohammed Sanusi II, on Wednesday met behind closed doors with the Acting President, Yemi Osinbajo.
The brief meeting took place inside Osinbajo’s office at the Presidential Villa, Abuja.
The traditional ruler arrived for the meeting shortly after the Acting President left the Council Chambers where he presided over a meeting of the Federal Executive Council.
He, however, refused to speak with State House correspondents on his mission to Osinbajo.
“You can just report that I came to the Villa,” he simply told the journalists as he made his way out of the Presidential Villa.
As of the time of filing this report, there has not been any official statement from the Presidency on the agenda of the meeting.
The Emir of Kano also attended  the award presentation ceremony of ‘Most Security Conscious Governor’ to Governor Yahaya Bello of Kogi in Abuja on Tuesday by the Nigeria Police Force.
At the event, the top monarch explained that the bloodshed in Southern Kaduna persisted because the culprits behind the violence were not punished.
He noted that many of the culprits had been identified in the past by tribunals, but nothing was done to them.
Sanusi stated that the nation was facing many threats and accused most leaders of selfishness, stressing that they cared only for themselves and their families.
He attributed the  security challenges  in the country to poverty and lack of education.
The Emir said it was ironic that the Boko Haram sect which claimed to be fighting for Islam was killing Muslims while the Niger Delta militants agitating for resource control were bombing oil pipelines and destroying their natural environment.
He said, “You are a Muslim, you go to mosques, people are praying and you are killing them and saying Allah. In the Niger Delta, we have people who are fighting for resource control, they want money from oil and how do they get the money? They blow up the pipelines.
“There is such a lack of understanding, focus and sense to the violence. How do you blow up your pipelines, resources because you want resource control? How would you blow up mosques because you want to establish an Islamic system?”
He added, “In Southern Kaduna, we have people who have lived together for decades and centuries killing each other because they have constructed fake identities –  settler and indigene – and because of genuinely lack of enforcement of the law.
“Every time there is crisis in Southern Kaduna, people die, there is a tribunal, there is a report, culprits are identified and nothing happens. So, these small instances utterly lead to conflagration.”
Sanusi admonished state governors and other political leaders in the country to make the citizens their focus and responsibility.
He stated that the leaders were focused on constructing skyscrapers and roads and building beautiful state capitals instead of tackling poverty among the populace.
The monarch noted that billions of naira expended on frivolous projects could go into education and agriculture.
Source:punch

Much ado about stealing songs among artistes