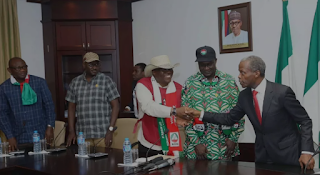 Corruption is killing Nigeria, Osinbajo cries out
Protesting Nigerian workers on Thursday put the Executive and the Legislative arms of government on the scale and concluded that their perfor­mances are far from satisfac­tory.
The protesters, led by the leadership of the Nigeria La­bour Congress (NLC), the Trade Union Congress (TUC) and some Civil Society Organ­isations (CSOs) lamented that while thesis  citizens groan under hardship, public officials were indifferent to their plight.
At the Abuja rally, the NLC President, Comrade Ayuba Wabba, who spoke on several burning national issues, par­ticularly took up the National Assembly, which he described as a “criminal enterprise.”
He threatened that the or­ganised labour in the country will picket the National Assem­bly and other institutions that are failing in their responsibilities to Nigerians.
Wabba said that President Muhammadu Buhari needs to give his anti-corruption crusade a better face, by making “account­ability, transparency and rule of law his watchwords”.
Speaking at the Unity Foun­tain, Abuja, before marching to the Presidential Villa to meet the Acting President, Yemi Osinbajo, Wabba said that the protest was necessitated because “bad gov­ernance instead of good govern­ance is thriving in Nigeria.
“The government must know that is it not only workers that are suffering, but ordinary citi­zens who depend on the work­ers, are suffering immensely. For this reason, we shall picket the in­stitutions that make up govern­ment one after the other. After the Presidency, we are facing the Na­tional Assembly.
“So long as they are not liv­ing up to their responsibilities, we will make it very difficult for them to continue in the criminal enterprise they call the Nation­al Assembly. So, we demand ac­countability, we demand due pro­cess,” Wabba stressed.
He further explained that, “Nigerians are going through se­rious challenges more than be­fore”, adding that “these challeng­es are compounded by the total absence of good governance, ac­countability, transparency and rule of law.
“Any system that does not have the ingredients of good gov­ernance will mean suffering and more hardship for the citizens. So, that is why we are marching to canvass for good governance”.
Buttressing his points he stat­ed: “Imo State governor is owing pensioners several months’ ar­rears and he is a member of the ruling All Progressives Congress (APC); is that a sign of good gov­ernance?”
Wabba continued: “Things have not really changed and we have to be careful. The fight against corruption is the funda­mental basis that every govern­ment must embark on for Nige­ria to develop.
“Imo State Governor has shamelessly deceived the peo­ple of Imo State by telling them that Dana Air is now Imo Air­line. Looking at it, of what ben­efit is this that Governor Rochas Okorocha has done? It is also the same aircraft that Dana has been using that now turned into Imo Airline,” he lamented.
The National Secretary of Textile Workers Union, Dr. Isa Aremu, said: “You remember last year when all of a sudden, the government we voted in, that said it stands for change, increased the price of fuel?
“The NLC kicked against it and some people said it was not a problem but today, everything that the NLC protested against is happening. Now, people are complaining of high cost of liv­ing, and we are happy that Nige­rians are coming out to demand for accountability and good gov­ernance from their government.
“We are protesting for good governance which is accounta­bility, prompt payment of sala­ries, result-oriented policies that will pull the economy out of re­cession, interrupted power sup­ply and adequate minimum wage. Non-payment of salaries is poli­cy corruption. More than ever before, this is the most impor­tant time to increase the wages of workers,” he said.
Osinbajo, who received the delegation led by Wabba and TUC leader, Bobboi Kaigama, was presented an 18-point de­mand.
In his response, Osinbajo de­clared that corruption has so per­meated the Nigerian society such that even religious institutions are not exempted; and that it has been at the root of the problem drag­ging the nation backwards.
“Yet, wealthy and influen­tial persons are fighting hard to make the trend continue despite the Buhari administration’s best intentions and efforts,” Osinba­jo lamented.
He recalled how corrup­tion almost grounded the coun­try, declaring that not much can be achieved to move the country forward without seriously con­fronting sleaze and graft, some­thing the Buhari administration is determined to do.
Osinbajo said: “Every time you fight corruption the way we are trying to fight corruption, there is a major fight back, be­cause corruption in this country is wealthy, powerful, influential, and it is in every aspect of our lives.
“It is in practically all institu­tions, including religious institu­tions. The social media campaign of ‘bring back corruption’ is an or­chestrated one. Nobody that is suffering can say bring back cor­ruption.
“Attempts by those who are being tried for corruption to de­lay trials are also parts of the or­chestrated campaign. If we don’t speak up against corrupt officials who make it look as if there is a witch-hunt then we will not suc­ceed in the fight”.
He also reiterated the admin­istration’s commitment to work­ers’ welfare, even as he recalled how President Buhari sourced bailout funds to help state gov­ernments offset the backlog of workers’ salaries and pensions.
He further pledged that gov­ernment would carry the labour and civil society along in the plans to revive the economy.
Wabba, who spoke on behalf of the 18 union leaders, said that corruption had become system­ic in Nigeria, urging the govern­ment to address the issue of ac­countability and adherence to the rule of law, whilst also point­ing out that the challenge in Ni­geria was not about resources but about prudent management.
Kaigama added that every Nigerian should join hands with the federal government in fight­ing corruption, which must not be viewed only in terms of Na­ira and Kobo, but also in ensur­ing equity among the populace.
Source :the authorityngr