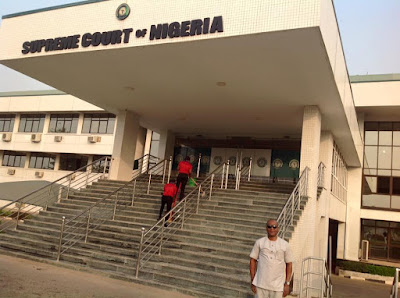 The Forged Supreme Court Judgement sighted by PUO REPORTS has one Barrister Henry P.M Apeli as the Counsel to Paul Emeka’s Loyalists in Bayelsa State.

It was gathered that one Rev Aniefiok Sam,a Suspected Cultist working for Paul Emeka in Bayelsa State connived with Barr Henry Apeli to Forge a Document claiming the Supreme Court has given a Judgement in Paul Emeka’s Favour.

It was further Learnt that after Forging the Documents,Barr Henry Apeli sent a Copy to the DPO in-charge of A Division of the Bayelsa State Police Command,thereafter went straight to take over Assemblies Of God Church 1 Famgbe,the Headquarters of Yenagoa Section 6.

However after thorough Investigation by the D.P.O incharge of A Division ,Yenagoa of the Bayelsa State Police Command C.PS Idowu,the Documents was found out to be fake and Forged one.

Subsequently the Police arrested and Detained Rev Aniefok Sam who is a core Loyalists of Paul Emeka for Forging the Judgement of the Supreme Court.

He was later Released after signing an undertaking never to disturb Assemblies Of God Church Fanmgbe until the Supreme Court gives its ruling on the 24th of February 2017.

It will also be recalled that in January 2016,Rev Paul Emeka himself pre-emted the Supreme Court when he granted Press Interviews Claiming that he has won the case he instituted against Assemblies Of God Nigeria.