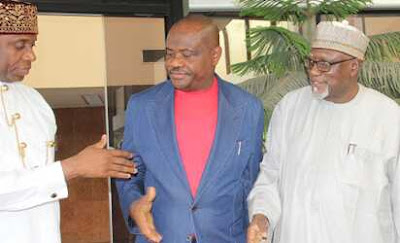 Osibanjo is expected to engage the Chiefs and Elders in Rivers State on how to resolve the agitation by the Niger Delta Avengers and other Militia Groups in the Region.

However,the Acting Presidents visit to Rivers State may turn the state into a theatre of Drama as two Political enemies the Rivers State Governor Nyesom Wike and the Minister of Transportation Hon Chibuike Amaechi may have packages for the Media.

During the Flag-Off of the Clean up of Ogoni by the acting President Prof Yemi Osibanjo on June 2 2016,messers Governor Wike and Minister Amaechi deliberately avoided each other both at the airport and the event venue.

It is not clear if the Minister of Transportation Mr Chibuike Amaechi will be among the entourage of the acting President to Rivers State,but sources close to the Minister say he will be on ground to receive the acting in the State.

All eyes on Rivers as Osibanjo Visits