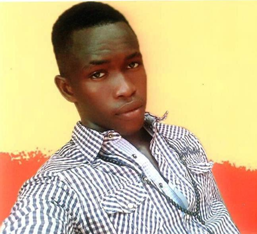 Cross River State High Court sitting in Calabar, on Friday, February 10th, remanded one Godwin Elewana at the Afokang Prisons for the second time for allegedly killing and burying 22 year old Douglas Ojugbo (pictured) whom he had suspected was having an affair with his daughter.

In March 2015, Elewana, described as a dangerous man chased the late Douglas upon sighting him from a distance of about a kilometer to the gate of the Cross River Basin Development Authority where he shot him on the leg and arm.

After he died, Elewana of River Basin Authority, 8 Miles Calabar, took the corpse to the Federal Housing Police Station where he allegedly connived with the DPO to bury the deceased at the Goldie cemetery.

But, the deceased father in a petition to the Zone 6 command of the Nigeria Police Force argued that late Douglas was not having an affair with the accused daughter but only wanted to collect the balance of his Mini Laptop he had sold earlier to her.

The matter which was heard at Court 8 presided over by Justice Ukpa Ebitham saw prosecution counsel Amaja Eneji tender evidence to the Court which showed that the license of the double barreled gun used in shooting the deceased expired in 2013, about 2 years before the incident.
Also tendered in evidence were two expended cartridges, one machete, a double barreled gun and five pellets recovered from the body of the deceased following an autopsy carried out after exhumation of the corpse reports.

Amaja who argued that no civilian had the right to take the life of another prayed the Court to critically assess the matter with a view to delivering judgement.

However, Defense Counsel, Clement Ukaegbu, told the Court that the wife of the accused had filed for an out of court settlement. The matter is adjourned till February 27 with presiding Judge Ebitham saying the matter will not be allowed to proceed beyond 2 weeks as it was a case of alleged murder.