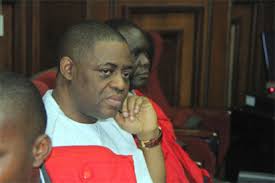 The Economic and Financial Crimes Commission has pleaded with Justice Muslim Hassan of the Federal High Court in Lagos to dismiss the application by a former Aviation Minister, Femi Fani-Kayode, seeking the transfer of his criminal trial from Lagos to Abuja.

The EFCC is prosecuting Fani-Kayode for an alleged fraud of N4.9bn.
Standing trial alongside Fani-Kayode on 17 counts are a former Minister of State for Finance, Nenadi Usman, an ex-Chairman of Kagarko Local Government Area of Kaduna State, Mr. Yusuf Danjuma, and a company, Jointrust Dimentions Nigeria Limited.
Fani-Kayode had, in an application filed through his lawyer, Mr. Norrison Quakers (SAN), pleaded for the transfer of his trial to Abuja for convenience and on the grounds that the cause of action leading to the charges took place in Abuja.
Besides, the former minister also said he did not have confidence in Justice Hassan who is presiding over the case.
Fani-Kayode said he was afraid that he would not get justice before Justice Hassan, because the judge was a lawyer for the EFCC until recently when he was appointed as a judge of the Federal High Court.
Fani-Kayode recalled that it was Justice Hassan, then a senior counsel for the EFCC,who drafted, filed and signed a charge marked, FHC/L/523c/2008, leading to his trial for alleged N100m money laundering before Justice Rita Ofili-Ajumogobia.
However, opposing Fani-Kayode’s application, the EFCC, in a counter-affidavit, begged Justice Hassan not to grant the request to transfer the case to Abuja.
The anti-graft commission said contrary to Fani-Kayode’s claim, part of the criminal activities alleged against him took place in Lagos.
It added that the witnesses it intended to call in the case live in Lagos.
“The various accounts used as an intermediate step in the scheme of the alleged fraud/offences are domiciled in Zenith Bank Plc which has its operational headquarters in Lagos,” counsel for the EFCC, Idris Mohammed, said in the counter-affidavit.
The EFCC also contended that it was too late for the Chief Judge of the Federal High Court to transfer the case to Abuja because trial had already started and one witness had already been called.
Source :punch