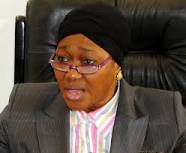 A former chairman of the Economic and Financial Crimes Commission, Mrs. Farida Waziri, on Sunday expressed concern over the perceived politicisation of the the medical trip of President Muhammadu Buhari with a call on Nigerians to cultivate the habit of encouraging their leaders, rather than demonizing them.

According to her, the present economic hardship in the country should not lead to some citizens wishing their leaders dead.
“Speaking positively about our leaders and country will no doubt have a positive impact on our collective image around the world.

Agreed, there is much suffering in the land but this should not change us from being the good people that we have always been , by wishing our leaders dead. Let us have a rethink.

We can’t afford to cut our noses to spite our faces. We must not lose our humanity even in the face of hardship and recession, because it is our collective effort to build this nation”, the ex-EFCC chairman emphasised.

Waziri in a statement obtained by THE PUNCH in Abuja, said while great nations adore their leaders and do not talk ill of them especially the good ones, Nigerians do not wish their leaders well.
She said, “The world over, great nations; whether the US, UK, China, Germany or France and more, they don’t talk ill of their leaders, instead, they encourage them and build them as exemplary national figures. As wife of Nigeria’s Ambassador to Turkey in 2004-2008, I arrived at Atatürk Airport Istanbul, my escort informed me proudly that the airport is named after the father of modern Turkey.
“Downtown Istanbul main street was also adorned with portraits of the man, Atatürk. This, to me, is one clear way to encourage and build our national figures and leaders. Let the good ones serve as good examples of good leadership and the bad ones as such.
Source :punch

Elections may not hold in liberated towns, villages