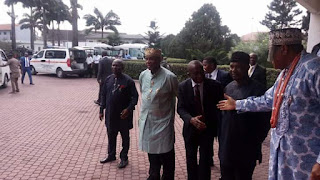 Our Correspondent who monitored the visit of the Acting President reports that the Rivers State Governor Barr Nyesom Wike hijacked the visit,making it difficult for the Leaders of the All progressive Congress to speak with Prof Osibanjo.

It was gathered that the Minister of Transportation Mr Chibuike Amaechi was allowed access to the Rivers State Government House where the stakeholders meeting held because he was among the entourage of the acting President.

“Honourable Minister of Transportation, Rt. Hon. Chibuike Rotimi Amaechi Arrived Government House Port Harcourt with Acting President of the Federal Republic of Nigeria,  Prof. Yomi Osinbajo,  though APC members in the State and their Party Leaders where not invited and not allowed to participate, speak during the Town Hall Meeting with the Acting president,  it was only PDP members that where allowed to speak. at Government house Port Harcourt”.
Mr Amechis photographer Israel Ibeleme said via a Facebook post.

The Governor of Rivers State took the acting President round some facilities under construction in the State before the stakeholders meeting began in Government House Portharcourt. 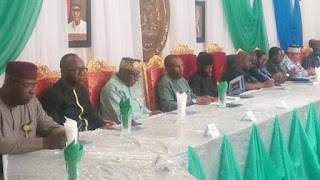