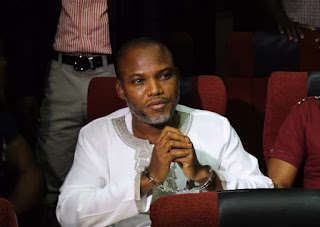 Citing intelligence reports, the Indigenous Peoples of Biafra (IPOB), has alerted Nigerians and the internation-al community of a plot to assas-sinate its detained leader, Mazi Nnamdi Kanu through a jail-break.IPOB claimed that a power-ful Western country was working with some Nigerians to carry out the plot.

In a press statement it issued on Sunday through its spokesper-sons, Mr. Emma Nmezu and Mr. Clifford Iroanya, IPOB accused the foreign power (name with-held) of masterminding the plot in collaboration with their Nigerian cohorts.
IPOB said: “We alert the world that the foreign government is doing everything and anything to kill Mazi Nnamdi Kanu. With this latest plan, we are putting it on record that the life of Nnamdi Kanu is on a cliff-hanger and the European nation is behind every move to assassinate him”.
According to IPOB, those be-hind the plot were plotting to use some terrorists to stage-manage a jailbreak in Kuje Prison where Kanu is detained and kill him un-der the pretext that he was caught in a crossfire.
The statement read in part: “The assassination will be carried out in the form of a stage-man-aged prison escape of detained Boko Haram terrorists. “The new plan is to bring other members of Boko Haram living in Northern Nigeria to storm the Kuje Prison and instigate a pris-on jailbreak which will result in the exchange of gunfire between them and security agencies during which Nnamdi Kanu will be purportedly caught in the crossfire.
“We repeat with all finality that the Western government is the mastermind of this plan. “Our highly reliable and im-peccable intelligence source re-vealed that the foreign power was rattled by the revelations we made through our press release of January 6, 2017, where we exposed their original plan to stealthily ad-minister a non-traceable poison on Nnamdi Kanu and this was sup-posed to happen before the swearing in of President Donald Trump of the United States of America (USA)”.
IPOB further said its fears about the authenticity of the plot were heightened by a recent online report which quoted the Information Minister, Alhaji Lai Mohammed, as saying that “the Muslim Brotherhood, an Islamist group and an affiliate of Boko Haram, is planning to attack banks, arms de-pots and prisons across the country with bombs and highcalibre weapons.
”Mohammed was also quot-ed as saying that: “Further intelli-gence monitoring has revealed that members of the Muslim Brother-hood are planning to forcefully free their members who are in deten-tion in Kogi, Abuja and Kaduna, including one Bilyaminu, an Im-provised Explosive Device (IED) expert for the group who is now at Kuje Prison.’’IPOB, therefore, argued that “it is obvious that this is a well-orches-trated plan to assassinate our lead-er, Nnamdi Kanu, and pass it on to the jailbreak attempts of detained Boko Haram terrorists”.
The pro- Biafra group won-dered why Europeans would want Kanu who is also its citizen dead in a Nigerian prison.Efforts to get the Information Minister react to this allegation failed as he refused to pick calls put through to his telephone line at least five members of the Indigenous Peoples of Biafra (IPOB), have been allegedly shot dead in Asaba Delta State.
In a statement sent to an on-line newspaper on Sunday, IPOB spokesman, Emma Powerful claimed that military men stormed a gathering of the pro-Biafra group and shot members on target.
The terse statement, read: “Happening now!!! Alert the world. Another Nigerian army massacre going on now at IPOB family meeting at Okwe Primary School, Oshimili South LGA, Asaba Delta State. IPOB and its leadership worldwide condemn the attack on our members at Asaba in Delta state.”
“Hausa Fulani people living near the primary school called their Islamic brothers in the Nigerian Army who came and opened fire on another IPOB peaceful assembly, yet again. Five people confirmed dead right now.”
Source :authorityngr