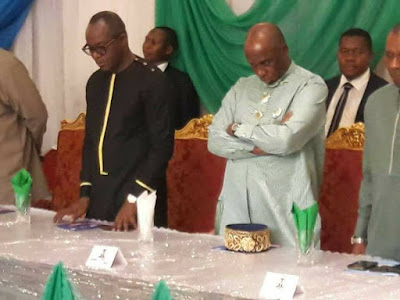 Former Governor Of Rivers State and Minister Of Transportation Mr Chibuike Amaechi was today booed at the Rivers State Government House during the stakeholders meeting between the Federal Government and Niger Delta Leaders for Rivers State.

The Federal Governments Delegation led by the acting President Prof Yemi Osibanjo had in its entourage the Ministers of Petroluem Mr Ibe Kachikwu,Minister of Transportation Mr Chibuike Amaechi among others.

The Visit of the Acting Vice President to Rivers State ought to have been an apolitical thing due to the results expected of such meeting,but the Rivers State Government led by Governor Nyesom Wike turned it into a Political visit when it failed to invite the Leaders and members of the All Progessive Congress in the State.

Trouble Started when Dr. Ibe Kachukwu, Honourable Minister of State for Petroleum tried to eulogize the Former Rivers State Governor who was virtually the only Rivers APC Leader allowed to the venue filled with mostly Top Leaders and members of the Peoples Democratic Party(PDP) and members of the State House of Assembly.

Mr Kachikwu had said “Let me recognize the presence of your Ex Governor, the Leader of [APC] South South” a statement which erupted series of shouts from the audience for minutes