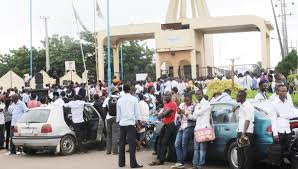 The Students Union President of The Polytechnic Ibadan, Oluwadamilola Peter Edema and 18 other students of the institution who were detained at the Oyo State Police Command headquarters, Eleyele, Ibadan, have been freed.

The students, according to the police Public Relations Officer, Adekunle Ajisebutu, were arrested on Friday for assaulting policemen on duty, breach of public peace and invasion of the state police command.

But the students claimed that they were at the command to bail two of their colleagues who were wrongly arrested by the police.

Edema confirmed to journalists on Monday that they have been released.

The Treasurer of the union, Mariam Anifowose, in a telephone conversation with our correspondent, also confirmed that the detained students have been released.

The students, however, did not given details of their ordeal at the detention and the conditions in which they were released.

What can Buhari do about Amaechi? By Abimbola Adelakun