Home Uncategorized Presidency: Igbo must take up fight from where I stopped –Ekwueme
Spread the post 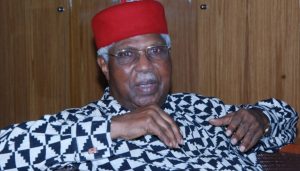 Former Vice President, Dr. Alex Ekwueme, has called on Igbo to take up the fight for the Presidency from where he stopped in 2003.
Speaking during an interactive session with newsmen, shortly after the child dedication ceremony of one of his political godsons, held at St. Bernard’s Catholic Church, Calabar, Cross River State yesterday, Ekwueme said he took a shot at the presidency twice but did not succeed.
He expressed hope that Igbo would take up the gauntlet and ensure that the dreams and aspiration of Igbo nation in producing a president were realised.
He said: “I was Vice President until December 1983. Going by the old NPN order, I would have contested for the number one position in 1987, but the military intervened in 1983 and the civilian regime was cut short.
“I tried again in 1998 and (Olusegun) Obasanjo was released from prison and he came and won, supported by his colleagues in the military. I tried again in 2003 and the same thing happened. I, therefore, pray that the other people (Igbo) can take it up from there and make progress.”
On President Muhammadu Buhari’s health, Ekwueme said: “We have conflicting reports about the president’s health. The Minister of Information says he is hale and hearty, but his wife says we should pray for him.
“So if he is hale and hearty, I don’t know why she said we should pray for him. Whatever it is, we ask God to look after him. We want Nigeria to be at peace and to make progress and see how we can get out of our present difficulties.
“We really need prayers. We are in great difficulty. People are suffering. There is hunger in the land and it is not very encouraging. So we need God’s intervention to help us get out of it.”
Source :sun

At NEC, Governors Stop Short of Calling for Devaluation

Internal Disagreements In PDP Should Be Resolved Using The Its Machinery:...