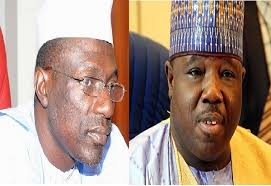 The Strategy Review and Inter-Party Affairs Committee, set up by Senator Ahmed Makarfi-led National Caretaker Committee, has called for the expulsion of the National Chairman of the Peoples Democratic Party, Senator Ali Modu Sheriff, from the party.
Also recommended for expulsion are all those working with Sheriff in the National Working Committee.
The officials include the Deputy National Chairman of the party, Dr. Cairo Ojougboh; National Secretary, Prof. Wale Oladipo; National Auditor, Alhaji Fatai Adeyanju; National Treasurer, Bala Buhari; and the Acting National Publicity Secretary, Mr. Bernard Mikko.
The committee, which made the recommendations, was headed by a former Minister of Information, Prof. Jerry Gana.
Writing under ‘Anti-party activities’, the Gana committee said, “Members viewed with serious concern the activities of the Senator Ali Modu Sheriff group, which centre on anti-party activities.
“Members unanimously suggested that they be expelled from the party through their respective wards.”
The former information minister and some members of the committee were at the residence of the former National Security Adviser, Lt.-Gen. Mohammed Gusau (retd.), in Abuja on Wednesday, where the copy of the committee’s report was submitted to him.
Gusau, while receiving the document, described the leadership crisis that had engulfed the party as a sad one, which he believed called for urgent intervention.
He promised to study the report, meet with the two warring groups and give directives.
A copy of the voluminous recommendations was obtained by our correspondent on Wednesday.
Makarfi and his faction were said to be planning to implement the report if they get favourable judgment at the Supreme Court, where they had filed an appeal against the Court of Appeal judgment, which ruled that Sheriff remained the chairman of the former ruling party.
In an effort to strengthen party supremacy, the committee also said “all members of the party – old and new – should make public a written affirmation of their loyalty to the party and its constitution.”
It was also stated that those being referred to as leaders of the party, like president and the governors, should be stripped of the title of “leader.”
The report added, “The concept of ‘A Leader’ of the party at any level is alien to the PDP constitution. Accordingly, all claims, pretences, appellations and assumptions to such a title should be stopped and any attempt to introduce it should be discouraged.”
The committee recommended that the chairmen of the party be stopped from being signatories to the party’s bank accounts.
The report stated, “According to the committee’s finding, the party is operating 32 bank accounts out of which only four are operational.
“We were further informed that the Umbrella Trust Account is being operated with the Diamond Bank Plc. As of now, the account is said to be worth a little over N300m only.
“At present, chairmen are mandatory signatories to the party’s bank accounts with either secretaries or treasurers. This is contrary to the contemporary best practices.
“The syndicate recommends that the treasurer be mandatory signatories with either secretaries or financial secretaries.”
Meanwhile, Makarfi, on Wednesday in Abuja, accused Sheriff of jettisoning the peace proposal put forward by former President Goodluck Jonathan.
The former governor of Kaduna State also alleged that the Governor of Bayelsa State, Mr. Seriake Dickson, who headed the Reconciliation Committee, was working against the resolution reached between Jonathan and PDP governors.
He said it was wrong for Dickson to have recommended the convening of a national convention in June.
He stated that two of the grounds of the appeal against the Court of Appeal’s judgment in Port Harcourt, Rivers  State, were on the ruling that the tenure of three national officers would expire by August while that of 18 others would end in July 2018.
Speaking at a meeting of the PDP Northern Elders Forum, held in Abuja, Makarfi said the former President presented to him the resolution reached at a meeting with the governors, which he said contained ways to end the crisis.
He said, “President Jonathan, after meeting with the governors, at about 1am, he called me and told me about the resolution they had reached, which he said would be forwarded to the NASS caucus and other organs of the party as part of the political solution.
“Former President Jonathan said he told Sheriff to go and consult and after his reply, he will get back to him. Up until now, he has not got back to him. What it means is that perhaps, he did not get positive response from Sheriff.”
Source: punch

Judge To Paul Emeka: I Can’t Order For Sharing Assemblies...

Jega: no plan to rig election for any party