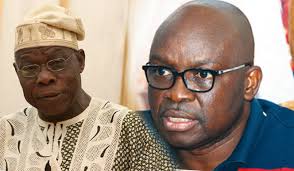 The governor said the former President lacked moral rights to accuse anyone of corruption, challenging him to explain to Nigerians the source of his wealth.
He was reacting to comment credited to Obasanjo that African leaders should ensure that treasury looters were exposed and that a former Attorney General of the Federation and Minister of Justice, Mohammed Adoke, should stop mentioning his name in the controversial $1.09bn Malabu Oil deal.
Fayose, in a press release issued on Thursday by his Special Assistant on Public Communications and New Media, Lere Olayinka, challenged the former President to rather explain to Nigerians the source of his wealth.
Fayose said it smacked of the highest level of hypocrisy for Obasanjo to be sermonising about corruption.
According to him, it is on record that the out-of-court settlement on the controversial Malabu Oil block was initiated in 2006 during Obasanjo’s administration.
Reiterating his demand that the former President should refund the N10m that he was allegedly forced alongside other governors to donate to his presidential library project, the governor said, “Someone like Obasanjo, who used his position as President to extort money from governors, businessmen and contractors to build his presidential library lacked moral rights to accuse anyone of corruption.
“Other Nigerians who left offices as President are still relevant to their people, but can the same be said about Obasanjo? Was he useful to the Yoruba race as President and now as former President? The bad state that he left major roads linking the South-West to other zones in Nigeria, especially the Lagos-Ibadan expressway remains a pointer to this. Yet, he goes about postulating as if he is the only honest Nigerian who can make things right in the country.”
Source: punch

You are Bloody Fools,PDP Tells Defectors