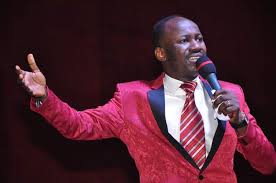 The Christian Association of Nigeria has said the organisation will not investigate allegations of sexual misconduct being made by Ms. Stephanie Otobo against Apostle Johnson Suleman, founder of Omega Fire Ministries Worldwide.

A top official at the CAN’s national office told Saturday PUNCH on Friday that the organisation is only concerned with denominational issues and not personal ones, under which Suleman’s case falls.
Otobo had accused Suleman of illegal procurement of abortion, threat to life, and attempted murder, following which a Christian group, Concerned Christians, called on CAN to investigate the allegations.
In a statement signed by the Concerned Christians’ Secretary, Mr. Yusuf Dav, the group said there was a need for CAN to investigate the “alleged adultery case with a view to knowing the truth and communicating with the body of Christ.”
However, the CAN source, who spoke on condition of anonymity, said, “CAN provides an umbrella for Christian denominations and it is a bridge between the church and the nation, not between individuals. This issue has to do with individuals, ethics and morals. So it is the denomination that Suleman directly subscribes to that should look into it and not CAN.
“The CAN cannot be involved. What is happening is not an official issue. It is a personal issue. The man has denied the allegations made by the lady, but she insists and we are told that their lawyers and the appropriate authorities are already involved. If it was a matter that had to do with the church now, we would have waded into it. You will be aware that when the man was being harassed because of what he preached and said, CAN stepped in. We declared our position on that but this other matter is a little bit complex.
“If CAN comes out to say the man is being persecuted because he is a Christian, people might say that we are defending what is not defendable, and that the matter is immoral. Also, we don’t have an investigative department that deals with that in CAN. But if he is with the Pentecostal Fellowship of Nigeria, then the body can investigate the matter. CAN is an umbrella body for denominational blocs and not for individual Christians per se.”
However, efforts to reach the National President, PFN, Dr. Felix Omobude, on the phone were unsuccessful as he neither answered calls made to his mobile telephone nor responded to text message sent to him.
The Chairman, PFN, Edo State, where Suleman is based, Bishop Mon Igbinosa, told our correspondent on the telephone that he was bereaved and could not comment on the issue or direct our correspondent to any other official who could.
Source: punch

Our Boys Are In control of 22 LGAs -Obuah Boast