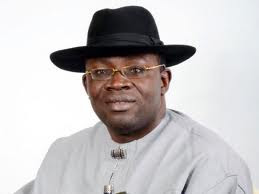 The Bayelsa State Governor, Seriake Dickson, has said the report of his reconciliation committee is not sacrosanct.

Dickson stated this in Abuja on Wednesday while presenting a copy of the report to the Caretaker Committee of the Peoples Democratic Party (PDP).

The report, which contained recommendations for the conduct of the party’s national convention, was last week, presented to the court backed National Chairman of the PDP, Alhaji Ali Modu Sheriff.

The governor said the report was not tailored to favour any group or individual, contrary to insinuations in some quarters, adding that the document is open to amendment.

He said, “It’s just a proposal that the committee came up with. It is not cast in stone so it is not sacrosanct. We are still consulting with key organs and stakeholders in the party. So it is still subject to amendment.

“Anyone with superior ideas and views on the document would be given the opportunity to make contributions because we made the proposal in good faith.”

The governor said he came to submit the report to the caretaker committee to enable its members make contributions in form of amendment or additional suggestions on the way forward.

Rueing the leadership crisis in the party, Governor Dickson sought the cooperation and contribution of the Makarfi group in finding political solution to the crisis.

He added: “Now the party has challenges, the institutions are intact. The organs of the party are intact, they are not affected by the crisis and as such, they can play their role and their leaders are known.

“We have them certainly as committee and we have said the convention committee can handle even the zoning and we should be able to confide in the judgement and wisdom of the leaders of the party.”