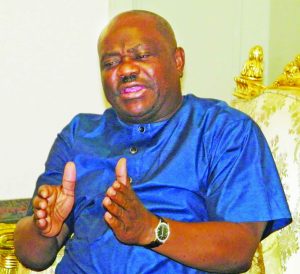 Two days after gunmen attacked a market in Zaki Biam, in Benue State, killing no fewer than 52 people, Rivers State Governor,  Nyesom Wike, has called for the imposition of a state of emergency on the state.
He also called for a thorough investigation into the death of Plateau State Commissioner for Housing and Urban Development, Samuel Galadima, who died at Rwang Pam Stadium, Jos yesterday during a jogging exercise, which also had Governor Simon Lalong and other members of the state exco as participated.
Speaking in an exclusive interview with Daily Sun yesterday, Wike said declaration of a state of emergency in Benue had become necessary because the governor, Samuel Ortom, has shown “ineptitude and lack of capacity to handle the situation. You can’t have a governor watching helplessly as his people are being killed. What kind of governor is that. He has displayed sheer laziness and incapacity in the whole issue, and this is quite unfortunate.”
While agreeing that governors are not fully in charge of security in states, despite being called chief security officers (CSOs), Wike, however, said governors are supposed to have strategies, working with security agencies, on how to combat crime.
“No excuse is acceptable for the high number of deaths in Benue.”
He said Benue has been in the news over wanton killings, which shows that the government has not done much in the area of security.
About 52 persons, including women and children, were on Monday shot dead, with several other people sustaining various degrees of injury, after gunmen invaded Zaki Biam, in Ukum Local Government Area of Benue.
The attack came 16 years after  2001 Zaki-Biam military invasion.
It was gathered that the attackers, who also set ablaze several houses and a petrol station in the area, had stormed the Zaki Biam International Yam Market, after arriving on motorbikes and Toyota Corolla cars, popularly known as ‘Dog Yash.’
An eywitness said as the guns boomed, “there was stampede and many, including children and women were killed,” adding: “Also, the invaders set several houses and a filling station on fire after which they fled the scene.”
Wike said Rivers State never experienced the kind of insecurity and killings being  seen in Benue, at a time people were plotting imposition of emergency rule in the state last year.
“We didn’t even have the kind of insecurity and killings that we are witnessing in Benue today when some of these mischievous opposition  in Abuja were calling for state of emergency in Rivers, but now they have suddenly lost their voices. You can see their level of hypocrisy and mischief? I am calling for an urgent imposition of state of emergency in Benue, because there is a clear incapacity of the governor there to act decisively to stem the killings and tackle the problem.”
On the death of Plateau State commissioner, the Rivers governor said the tragedy should be investigated, as the state governor and the government ought to have ascertained the state of health of the commissioners before subjecting them to such rigorous exercise.
Meanwhile, Governor Wike has launched “Operation Leave the Road” in Port Harcourt, aimed at evacuating street
traders, vulcanisers, road -side mechanics, artisans, street vendors and other persons constituting nuisance  on the roads. Such people were given  one week to vacate the roads.
A statement  by Simeon Nwakaudu, Special Assistant to the Rivers State Governor on Electronic Media,  said any person who  flouts this directive,  at the expiration of  the  one-week ultimatum, would  be arrested and prosecuted.
The government also ordered the evacuation of broken down  and out-of-use vehicles from the roads within one week, “failure which they  would be impounded and their owners prosecuted.”
The statement quoted Wike as saying that a task force  will be established  to implement  the new directive, with the view to ensuring  the maintenance of order on the roads.
In another development,  the Rivers State Executive Council has approved a 15-member Second Anniversary Committee.
Addressing newsmen after the State Executive Council meeting, presided over by Governor Nyesom Wike, Commissioner for Information, Dr. Austin Tam-George, named members of the committee to include Secretary to the Rivers State Government as chairman, while Commissioner for Housing, Secretary, Commissioner for Works, Commissioner of Education, Commissioner for Information, Commissioner for Sports and Commissioner for Women Affairs are members.
Others are Commissioner for Agriculture  (Governor’s Office), Head of Service, Chief of Staff, Special Adviser (Religious Affairs); Special  Adviser (Special Projects); Special Adviser (Security) and Permanent Secretary, Health.
Source:sun

The PEACOCK Is PLUCKED!!!! By Oby Ndukwe