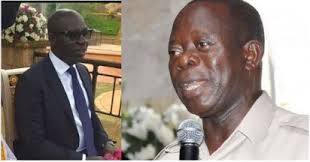 The immediate past governor of Edo State, Comrade Adams Oshiomhole, has tasked the state government and management of the Edo University, Iyamho, to be focused on the ideals behind the establishment of the institution.
The ex-governor said the institution was established to provide first class university education with skill acquisition, train future leaders and provide environment for quality learning, teaching and research.
Oshiomhole, who spoke at the first Founder’s Day lecture of the university, reminded the institution management that the school was not built for only children of the rich.
The Founder’s Day lecturers were delivered by Vice Chancellor of the University of Medical Sciences, Ondo State, Prof. Friday Okonofua and a former President of the Nigerian Bar Association (NBA), Barr. Austine Alegeh.
Oshiomhole stated that part of the institution policy was to pay tuition fees of gifted indigent students from grants made available to the university by the state government.
He urged the university management to strive towards maintaining facilities put in place for future generation to use.
He said, “We have a clear vision to build a world class university. I said we will not start with a temporary site. That was why we put standard structures in place. Management must continue to maintain these facilities.
“I told the VC then that if you must charge economic fees, they must allocate a percentage to indigent students who are brilliant and whose parents cannot afford to pay the fees. We must have brilliant students here to be covered by grants given to the university.
“Edo University must cover those gifted children. I will not accept for the state to subsidize education for the rich. To avoid disruption in academic calendar, I then directed that lecturers in this university be better paid.
“I hoped that some of these policies are sustained so that poor parents can send their children to this university.”
In his lecture titled, “Strengthening Democracy in Nigeria: The Role of the Judiciary,” Barr. Alegeh said the laws granted to the courts encouraged abuse of discretionary powers.
He called for the establishment of Bail Act, Sentencing Act and enactment of laws providing for maximum period an accused person may be remanded in prison custody.

I stand by my word,Jonathan must go- Mbaka Speaks again