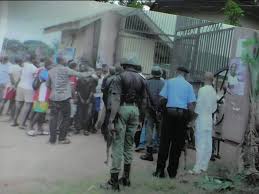 At least five others sustained severe gunshot wounds in the incident.

The tragedy which occurred in Okohia community, Isiala Mbano local government area of the state, made youths of the community to burn one of the police stations in the area.

The five victims that survived with injuries were still in coma at the time of filling this report.

According to eyewitnesses, the incident happened when youths, mainly teenagers who were holding  rally for their church crusade billed to start on Saturday had a flat tyre, at “Ukwu Omiri lawyer,” a few poles away from where some policemen mounted a roadblock for routine stop and search duty.

Our correspondent gathered that one of the police officers ordered the youths to remove the car from the place, but the youths who were from Emmanuel Healing Power Ministry, told the policeman that there was no way they could move the vehicle with the flat tyre.

An argument ensued between one of the policemen and the driver and the police officer slapped him (the driver) three times.

The killer cop, Ufere, who was not involved in the altercation, emerged from nowhere, opened fire on the youths and killed the victim.