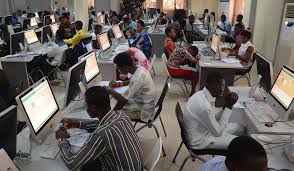 Some candidates that wanted to register for the Joint Admissions and Matriculation Board (JAMB) examination on Monday decried the poor internet services in Ado-Ekiti,  the capital of  Ekiti.

The candidates told the News Agency of Nigeria (NAN) in Ado Ekiti said that since the registration started on March, 20, they have not been able to log into the JAMB’s website.

They said that after each candidate had paid N6, 200 for the examination form to the bank and creating an e-mail address and JAMB profile, they were still unable to get a personal identification number (PIN) owing to poor internet services.

One of them, Modupe Alade, said she had completed the entire requirement but she was yet to collect her PIN from the JAMB’s website due to poor internet service.

She said  that she had been visiting JAMB’s  office in company with her friends who had same problem.

The staff of the examination body had been telling us to come back, Alade said.

She appealed to JAMB’s management to find a lasting solution to the internet problem to enable them register before the scheduled date of the examination.

Another candidate‎, Tope Aina, said he was disappointed when he arrived the JAMB’s office and one of its staff members told him that he could not register for the examination due to poor internet connectivity.

He said that most of his friends had been standing inside the scorching sun since morning, waiting patiently to see if they would be able to finalise their registration process.

“It is quite unfortunate that JAMB’s registration is currently having internet connectivity problems but JAMB’s management should find solutions to the problems.

“My friends and I have been inside the sun and on the queue ‎for hours without achieving anything as regard the registration.

“The internet connectivity has really caused a problem‎ for us and we just pray that the poor network will be solved in due time,’’ he said.

Omolade Akomolafe said the poor connectivity had  ‎wasted her money.

She said that she had to travel from her hometown to the JAMB office to complete her registration which she was unable to achieve.

She appealed to the management of JAMB to consider the stress of the candidates and solve the poor service quickly to enable them have time to prepare for the examination.

Other students who also spoke with NAN expressed their dissatisfaction with the poor internet service of the examination body.

They all called for an urgent repair of the board’s connectivity service to enable them register for the examination in due course.

Reacting, the State Coordinator of JAMB, Ekiti State branch, Mr Daniel Onileowo, refused to explain the cause of the poor internet connectivity.

He said it would be rectified in ‎due course as the management of the examination body was currently working on it.