Home Uncategorized Be laughing while NASS joke with your future, Ezekwesili tells Nigerians
Spread the post 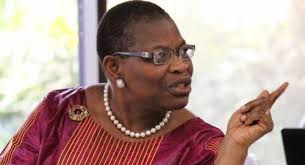 Former Minister of Education, Oby Ezekwesili, on Thursday, took a swipe at young Nigerians for condoning, what she termed, the ‘comedies’ going on in the Senate.

The Nigerian Senate has recently been embroiled in several scandals, including an allegation that Senator Dino Melaye does not hold a first degree from Ahmadu Bello University, Zaira as claimed.

After several twists to the scandal resulting in an investigation by the Senate and a N5bn suit against Sahara reporters, ABU’s Vice Chancellor told the Senate Ethics Committee that Melaye graduated from the university with a Third Class in BA Geography.

Melaye had subsequently posted a comic video online in celebration. He also appeared at the Senate plenary dressed in an academic gown.

But, in several posts on her Twitter page, Ezekwesili wondered why Nigerians felt “entertained” by happenings in the Senate.

She said, “Be laughing while tragi-comedians that COST more than N100 Billion every year carry on at the @nassnigeria . Better FIGHT for your FUTURE

“The 8th @NGRSenate & @HouseNGR have done NOTHING for CITIZENS except PAY themselves FAT ALLOWANCES, engage in SCANDALS & produce COMEDIES.

“You are a young Nigerian &cannot see the wicked hand you are being dealt? You “entertained” by @NGRSenate @HouseNGR , I kuku sorry for YOU.

“Balance there and be laughing, tweeting & swaggering while the folks in @NGRSenate @HouseNGR joke daily with your future. Na YOU sabii #End.”

The #BringBackOurGirls advocate also questioned the lawmakers attitude to finding the schoolgirls abducted from Chibok by the Boko Haram insurgents.

She noted that lawmakers in the US and UK showed more “concern for abducted #ChibokGirls” than their Nigerian counterparts.

She said, “By the way, how much did @NGRSenate Say it paid for that famous Range Rover it bought for Senate President @bukolasaraki? In this POVERTY?

“Lawmakers in the US and United Kingdom have shown concern for abducted #ChibokGirls but not their own who are BUSY spending ALLOWANCES.

“Lawmakers in the US and United Kingdom have shown concern for abducted #ChibokGirls but not their own who are BUSY buying 1 car for >N200M.

“Lawmakers in the US & United Kingdom have shown concern for abducted #ChibokGirls but not theirs who are BUSY CARING FOR THEIR OWN COMFORT.

“219 school children were ABDUCTED in the country of our Lawmakers for nearly 3 years. When have you heard any REAL CONCERN from NASS?

“Some US Lawmakers hold a weekly advocacy for ChibokGirls. UK Parliament has held a # of Hearings on them. NASS? They’re BUSY…SHARING MONEY

“If even five out of the remaining 195 ChibokGirls were daughters of our ANNOYINGLY ENTITLED Lawmakers, do you think they’ll be NONCHALANT?”