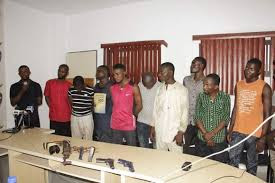 The police have arrested a dismissed Department of State Services operative, Abdulrasheed Maigari and 10 others for alleged involvement in the abduction of a former General Manager, Peugeot Automobile Nigeria, Alhaji Isa Salami in Abuja.

The ex-DSS officer, who was dismissed last year for his involvement in the theft of N310 million belonging to the Senate President, Bukola Saraki, was said to have rented the Suleja apartment in Niger State where the kidnap victim was kept.

Others include  the driver of the gang, Rajab Ishiaka, 22, Ali Sani, 27, Nuhu Sule, 20 and Mohammed Abubakar 21 who sold pre-registered SIM cards to them for ransom negotiation.

The police spokesman explained that Emeka, the gang leader, had earlier been charged to a Gwagwalada High Court in October, 2016 with three others for kidnapping and armed robbery.

“This suspect and his gang members were released by the court on December 8, 2016 less than eight weeks after being charged for kidnapping and armed robbery,” Moshood stated.

He added, “Ozor the second in command to the gang leader, a native of Nsukwato LGA Abia State, was also charged to court for armed robbery in November 2016 and was released by the court on January 25,2017.”

The police said that the former DSS officer, who joined the service as a cadet officer in September, 2011 was still facing criminal trial for stealing N310m.

Moshood said, “Maigari, a native of Donga LGA, Taraba State, a 2006  Political Science graduate was recruited into the DSS as a Graduate Officer in September 2011 and was dismissed and charged to court on November 11, 2016 for stealing N310m with some dismissed Army personnel in Abuja.

“The suspect was released by the court on November 28,2016 and he immediately joined this kidnapping gang; he became the coordinator of the gang and also rented the two apartments in Suleja where they kept their victims.”

The police spokesman added that the rifle and the two pistols used by the gang was sold to them by Tyavnor for N470,000 and N60,000 for each pistol.

Maigari admitted that he was dismissed by the DSS for involvement in the theft of the huge sum, adding that he met the gang members in prison custody where they struck a friendship.

“I joined the DSS in 2011 as a cadet officer, but I was dismissed from service over the theft of N310m from the senate president house and I was charged to court with others, but we were granted bail. I met Emeka in prison and he asked me to rent a house for which he gave me N300,000,” he explained.