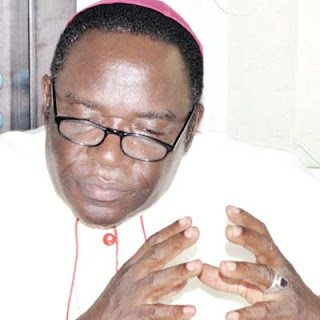 The Catholic Bishop of Sokoto, Mathew Hassan Kukah has criticised the perception that he was close to former President Goodluck Jonathan for what he could get.

“Despite my friendship with Jonathan over a long time, we never discussed a penny, we never discussed one dollar; we never exchanged a penny, and we never exchanged a dollar,” Kukah said.
In an interview in the current edition of The Interview, Kukah said those who thought they could smear him by warming up to President Muhammadu Buhari were responsible for fantasising his relationship with Jonathan.
“Suddenly, journalists whom I knew were writing, hoping they would be given positions (by Buhari), and all those who were abusing me, have gone full cycle,” he said.
He continued: “Those who should be ashamed of themselves are those who took money from Jonathan, tons of it, and buried under the table; they have decided to change course in the middle of the race. Those are the people you should be talking about.”
In a statement, the Managing Director/Editor-In-Chief of The Interview, Azu Ishiekwene said: “This is Kukah with his gloves off. Anti-Kukahs of every stripe have their match in this issue.”The clergyman revealed that, “certain people in PDP” have been telling him that Jonathan should have had a long-drawn-out exit, like the disgraced Gambian President Yahaya Jammeh.