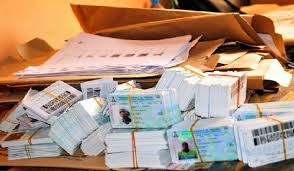 Ahead of the November 18 governorship election in Anambra, voter’s card is being retailed for N5,000 in the state.

Investigations showed that major political parties in the state have been purchasing the cards from willing electorate.

A source who pleaded anonymity told our correspondent that he sold his card to a major political party in the state for N5,000.

The Anambra State Association in the USA on Wednesday advised people of the state against selling their voter’s cards.

The association, under the umbrella Association for Anambra State Citizens Resident in the United States of America, reminded the people of the importance of the election.

Describing the poll as the heart and soul of the state, it urged people of the state not to mortgage the lives of coming generations.

In a statement signed by Messrs Michael Iloegbunam and Nnamdi Ozoh, National President and National Secretary respectively of the association, the body stated that as a watchdog organisation, it would not hesitate to expose any candidate, political party or group that fails to play according to the rule during and after the election.

T be our Governor for the next four years, ASA-USA Inc. will love to see a platform where the candidates of the various political parties will articulate their positions and visions for our beloved state.