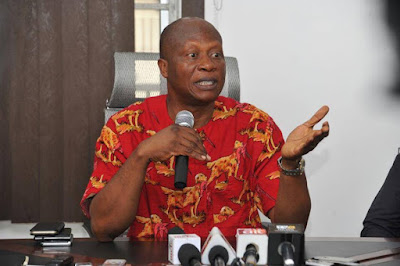 Abia State Government has described as false and malicious the report by PUNCH Newspaper that a primary school headmistress at Ohafia Local Government Area of the state was demoted to a classroom room teacher and transferred to Ukwa East Local Government Area for allegedly embarrassing the wife of the governor, Mrs Nkechi Ikpeazu.

The State Commissioner for Education, Prof. Ikechi Mgbeoji, made the denial while briefing newsmen in Umuahia.
Prof. Ikechi Mgbeoji who described the report as embarrassingly false, stated that he couldn’t find any proof or record of demotion or transfer from the Abia State Universal Basic Education Board, within whose jurisdiction the matter falls.
He said the ministry of Education embarked on thorough investigation and came up with the findings that the wife of the Governor did not order the demotion or transfer of any teacher from the said local government area and no head teacher was actually transferred or demoted.
Mgboji, who is a Professor of Law, however warned journalists in the state to be thorough and professional in their reporting, regretting that a newspaper like PUNCH will publish such unprofessional, biased and unfounded report, apparently written by a poorly trained stringer, without sighting any copy of a demotion or transfer letter issued by the relevant authorities in charge of teachers transfer and promotion/demotion.
He called on journalists to always investigate stories in order not to heat up the polity unnecessary. According to him, “I couldn’t find any evidence or document issued to the said headmistress to transfer her or demote her. I know as a matter of fact that the wife of the Governor didn’t issue any such instruction and she is not even the type inclined to such malicious response to issues.”
The commissioner called on journalists to feel free to unearth any letter purportedly issued to the headmistress by any government official transferring or demoting her.

Vice President Says There Are 800 Fulani Herdsmen In Custody

Amaechi: The Man Ahead Of His Time And His Audacity (2)...