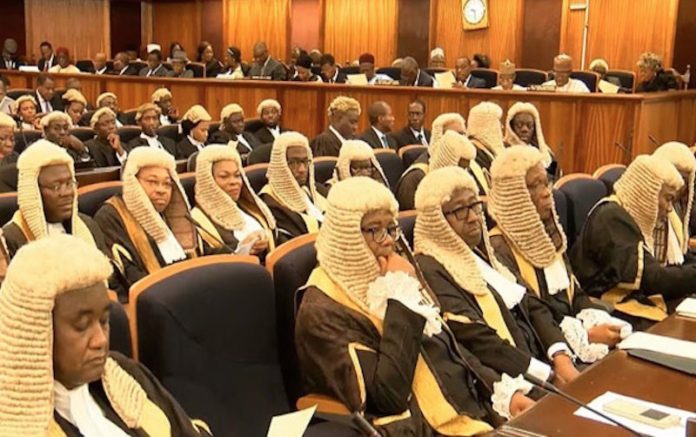 The National Judicial Council has constituted separate panels to investigate various allegations of misconduct against 15 judges, including two Chief Judges.

The NJC’s Director of Information, Mr. Soji Oye, who disclosed this in a statement on Monday, did not give the identities of the affected judges.

But it stated that the NJC received a letter from the Zamfara Sate Government approving the Council’s recommendation for the compulsory removal of Justice Musa Anka of the Zamfara State High Court.

Oye stated that the NJC took the decisions at its 83rd meeting held last week after considering the reports of the two Preliminary Complaints Assessment Committees on 46 petitions written against judicial officers in the federal and state judiciaries.

The NJC’s meeting was said to have been presided over by its Chairman, Justice Walter Onnoghen, who is also the Chief Justice of Nigeria.

The NJC had recommended Anka for compulsory retirement since May, 2011, for allegedly receiving a bribe of N200,000 from one Zubairu Abdumalik in order to deliver judgment in his favour.

But the NJC’s recommendation was not formally approved by the successive governors of the state as required by the Constitution since then.

The PUNCH had reported on July 28 that Anka was among seven judges kicked out of office since 2011, but had escaped full sanctions due to the failure of the Presidency, the police and state governors to implement key recommendations of the NJC against the affected judicial officials.

The NJC’s statement on Monday read in part, “Council welcomed as good development, a letter from Zamfara State Government approving the recommendation of the National Judicial Council for the compulsory removal of Hon. Mr. Justice Musa Ibrahim Anka from office for allegedly receiving a bribe of N200,000 from one Zubairu Abdumalik in order to deliver judgement in his favour.

“The recommendation was made to the Zamfara State Government by Council in 2011.”

The statement added that it had reported the Chairman of the Ikeja Branch of the Nigerian Bar Association, Adesina Ogunlana, to the Legal Practitioners’ Disciplinary Committee for allegedly using “uncouth language in a petition” he authored against the immediate past Chief Judge of Lagos State, Justice O. O. Atilade.

It stated that 15 judges, including two Chief Judges, were to be probed by 15 newly constituted panels, adding that 31 petitions against other judges were found to be unmeritorious.

It stated that the petitions against the Acting Chief Judge of Ondo State, Justice O. O. Akeredolu, and a judge of the Federal High Court in Abuja, Justice John Tsoho, were withdrawn at the instance of the petitioners.

The statement stated, “The National Judicial Council, under the Chairmanship of the Hon. Chief Justice of Nigeria, Hon. Mr. Justice Walter Nkanu Samuel Onnoghen, GCON, at its 83rd meeting constituted 15 committees to investigate various allegations in the petitions written against 15 judicial officers, including two Chief Judges.

“Council took the decision after considering the reports of the two Preliminary Complaints Assessment Committees on 46 petitions written against judicial officers in the federal and state judiciaries.

“It dismissed a total number of 31 petitions, 29 of which it found unmeritorious, and the remaining two written against Hon. Mr. Justice J. T. Tsoho of the Federal High Court and Hon. Mr. Justice O. O. Akeredolu, Acting Chief Judge of Ondo State, were withdrawn at the instance of the petitioners.

“Al-Sagr National Insurance Company, who wrote against Hon. Mr. Justice Tsoho, withdrew his petition since the Hon. Judge had delivered the ruling in his case.

The Council said it also dismissed the petitions against Justice L. T. C. Eruba of the High Court of Justice, Abia State and Grand Kadi Abdullahi Waiya of the Sharia Court of Appeal, Kano State.

The petitions written against two other judicial officials were dismissed “for lack of merit.”

But the NJC said it issued two letters of advice to Justices Mojisola Dada of the High Court of Lagos State and Chukwudi Charles Okaa of the Anambra State High Court “for violation of extant laws in the course of their judicial duties”.

It however stated that the immediate past Chief Judge of Plateau State, Justice P. D. Damulak, had escaped probe because he had retired from office.

It stated, “Council considered and found worthy of further investigation the petition, written by Azi A. Phillip, on behalf of All Farmers Association of Nigeria, Plateau State Chapter, accusing Hon. Justice P. D. Damulak, the immediate past Chief Judge of Plateau State, of bias, for failure to make his judgment in Suit No. PLD/J/236/16 delivered on 4th November, 2016, available to him till the time he wrote the petition.

“Council however decided not to constitute an Investigative Committee to look into the matter because the Hon. Chief Judge had already retired from service and therefore no longer in the employment of the National Judicial Council.”

State Collation of VAT will increase cost of living – Sanusi