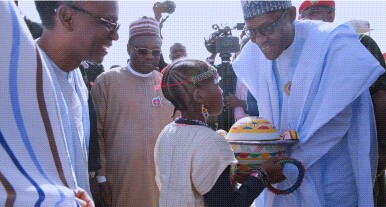 He had earlier commissioned the Inland Dry Port in Kakuri area of the city.

The President said his administration would link all Nigerian commercial and state capitals to the railway system to improve the nation’s socio-economic development.

He also warned Customs and Port officials from frustrating business activities at the Inland dry ports in major parts of the country.

Commissioning the additional locomotives and coaches at the Rigasa Railway Station, Kaduna, President Buhari said his government’s promise to connect all major Nigerian cities to railway was not statements of intentions, but a benchmark to measure the performance of the administration.

President Buhari said: “Let me once again reassure Nigerians that we are strongly committed to linking all major commercial and production centers as well as state capitals with railway system, as a way of bringing about rapid socio-economic development and improving the lives of our people. It was also conceived to encourage national integration.

“This is not only a statement of intentions, but a benchmark which we are using to measure the performance of our administration. Our resolve to develop our railway systemworlds class to a world-class standard remains a top priority.

“Additional criticaltheir projects include the rail line from Lagos to Calabar, which branches off to Benin, Agbor and Onitsha, Port-Harcourt to Maiduguri. Standard gauge rail line will branch off to Owerri, Awka, Abakaliki, Yola and Damaturu and Kano to Kazaure, Daura, Katsina, Jibiya to link with Maradi in Niger Republic as part of regional railway interconnectivity.

“Other important projects which have been approved is the procurement of more locomotives, coaches, workshops and equipment that will be used for new standard gauge lines. By way of encouraging private sector participation in our railway development, negotiations for concession of the narrow gauge railways with a consortium are in progress.

“We are looking forward to a more efficient train service on the narrow gauge lines to be driven by the private sector. It is on the basis of this, that we are creating a more conducive environment for private sector, especially by strengthening our legal and regular trade frameworks.

“To achieve these, am using this opportunity to solicit for support of all relevant stakeholders and especially the National Assembly and our development partners in realizing these objectives.

“I commissioned and flagged off the Abuja-Kaduna train service in July last year, which was Nigeria’s first ever outstanding train service. I am glad that this service has become very useful to commuters and has even become the preferred form of transport for the commuters for journey between Abuja and Kaduna.”

While commending the Minister of Transportation, Rotimi Amaechi, for his tireless efforts towards the development of the railway system, Buhari reiterated the resolve of his administration to vigorously pursue the development of the country through the implementation of the 25 year strategic railway master plan.