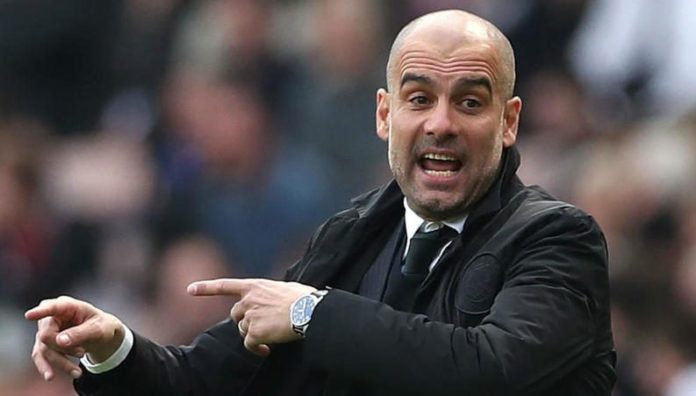 The chairman of English Premier League champions Manchester City is confident the club will reach even greater heights under the “relentless” Pep Guardiola despite having just completed a record-breaking season.

City became the first Premier League champions to post 100 points and won the title by a huge 19 points from second-placed Manchester United.

And with Guardiola having signed a new contract, City chairman Khaldoon Al Mubarak expects further progress under the Catalan manager.

“My expectation and the management expectation, certainly Pep’s expectation, is that this team will continue to improve,” Al Mubarak told City TV on Sunday.

“We have a coach, or a manager, in Pep that is relentless. There is not going to be any relaxation. That I can assure you.

City have won three Premier League titles since the Abu Dhabi United Group overseen by Sheikh Mansour took over the club in 2008.

But they have yet to win back-to-back titles under their Gulf state owners, while the Champions League remains an elusive prize.

Nevertheless, a bullish Al Mubarak added: “We’ve worked very hard over the last couple of years to build the squad, not only for this season but for many seasons to come. This is a young squad. Many of our most talented players are under the age of 26.

“You don’t get to 100 points without a full, high-quality squad, which is what we have.

“Any additions have to improve the squad — this is my biggest learning from the years of chairing this club.

“When winning bringing new players in is a very important decision because you have a winning formula that’s just won.

“Whatever you’re going to add has to be a decision that you don’t take very lightly at all and you have to bring players that will strengthen, improve and add competition in the squad. That is key.”

Al Mubarak said giving former Barcelona and Bayern Munich manager Guardiola a two-year contract extension that will keep him at Eastlands until 2020/21 had been a straightforward decision.

“Pep has been a joy to have as part of this club,” he said. “We see eye to eye. We shook hands on it and are happy to continue this journey.”

Zidane admits Real Madrid could be better without him but stays...