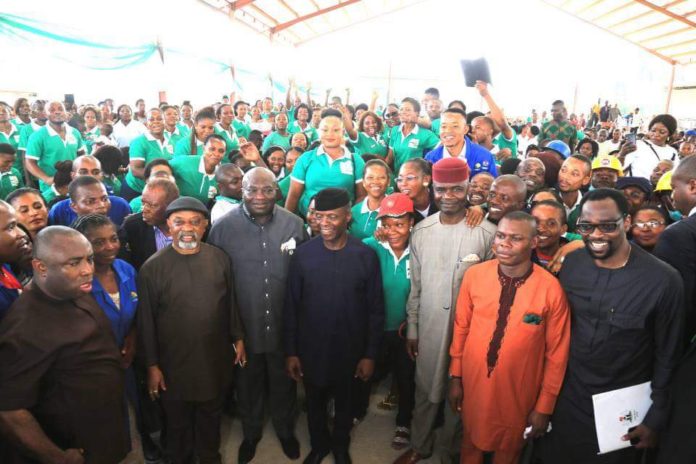 The Abia State Multiskill and Entrepreneurship Development Center (AMEDEC) have taken off with 200 trainees. This comes as the Vice President Yemi Osinbajo has launched the Federal Government N-Power programme in the state.
The Technical Vocational Education and Training (TVET) programme, which was developed and managed by Kiara De-Luke Academy in collaboration with Logistics De-Luke Ltd as a public/private/ partnership initiative of the state governor Dr Okezie Ikpeazu, is taking off with 200 pioneer male and female resident trainees whose 12 months training duration comprises three months theory and nine months practicals in the AMEDEC Center located beside the Academy.

The Federal government is responsible for the cost of the training in addition to paying the resident trainees monthly feeding allowances.The Kiara De-Luke Academy has as Chief Executive Officer Mr Endi Ezengwa who is also the Coordinator of the state Education For Employment Program alias E4E while Chief Raymond Aliga is CEO of Logistics De-Luke Ltd and AMEDEC.

According to the Chief Executive Officer of Kiara De-Luke Academy, Endi Ezengwa, said the trainees will practicalize their skills training at the ANEDEC Center which Center will also serve as a common facility Center where the graduates will be able to come in and produce their goods after graduation pending when they establish on their own.

Commissioning the Center located along new Aba – Umuahia road at Umuobiakwa in Obingwa LGA, which also featured the launch of the Federal Government N-Power in the state, Vice President Osinbajo reiterated Federal Government commitment to sustaining its Social Investment Programmes.

He said that the Federal Government instituted Social Investment programme which the N-Power is part of to gainfully engage Nigerian graduates and non-graduates and thus equip them with the right skills to be able to compete anywhere they find themselves globally.He said that Nigeria’s Social Investment programme is the largest in Africa and has provided jobs for hundreds of Nigerian youths purely on merit and commended the state governor Dr Okezie Ikpeazu’s government for keying into the programme.

Governor Ikpeazu in his remarks, said that his government took it upon itself to create means of livelihood for its citizens through skill and Entrepreneurship development, urged Abians to acquire the skills provided at the Center for their development. He assured that products of the graduates will be patronized by both state and federal governments urging that doing so should be made a public policy.

NBTE writes JAMB, notifies board about the restoration of Abia Poly’s Accreditation.

2023: Ohanaeze Youths Congratulate Speaker, Urge Him to Keep Championing the...