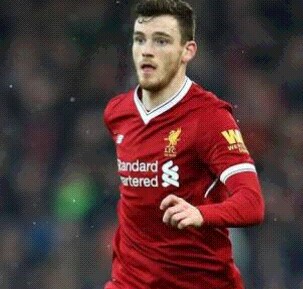 Andrew Robertson has been in outstanding form for Liverpool this season

Andrew Robertson says Liverpool must use any nerves to their advantage if they are to topple Real Madrid in Saturday’s Champions League final.

The Reds left-back watched Madrid’s final win over Juventus last season at home, sharing a curry with family and friends, but this time around he will be playing in Kiev.

The Scot has enjoyed a superb debut season at Anfield, playing a key role in Liverpool’s barnstorming run to the Champions League final, with the Reds beating FC Porto, Manchester City and Roma in the knockout stages and scoring 17 goals in the process.

Holders and 12-time winners Real Madrid stand between Liverpool and a sixth European title and Robertson insists the team will cope with the pressures of such a big game.

Robertson told Liverpool’s official website: “It’s all about how you use the nerves. You need to use them to your advantage. We’ve done that so far.

“Against Man City we used it to drive us on instead of shying away from the challenge.

“That’s what we’ve got to do on Saturday, from the first whistle you need to use the nerves and everything that comes with it in the right way.”

The Liverpool team have arrived in Kiev ahead of the Champions League final against Real Madrid.

Liverpool’s attack has been much heralded this season with the front three of Mohamed Salah, Sadio Mane and Roberto Firmino causing havoc against opposition defences.

But Real Madrid pose a serious goalscoring threat of their own, particularly with Cristiano Ronaldo in the side and Robertson is aware that Liverpool’s defence will face a stringent test.

He said: “They’ve got world-class players, especially going forward, that can punish you at any time.

“As an 11, we all have to be so focused and so switched on to them, but they can throw boys forward that maybe we can exploit.

“We’re good going forward as well, so I think it’ll be an attacking game and hopefully our front three and the rest of us can cause them problems, we can all defend as a team, work hard and keep them out at the other end.

“If we do that, then we give ourselves the best possible chance.”

Robertson has made 29 appearances for Liverpool in all competition this season, including five in the Champions League

For Liverpool, this game presents an opportunity to cap off their fantastic season in Europe, something manager Jurgen Klopp will be desperate to achieve, after losing the Champions League final to Bayern Munich when he was manager of Borussia Dortmund in 2013.

Robertson explained that the squad are completely behind their manager and will do all they can to realise their dream.

He said: “The manager has always had a don’t-lay-down attitude; he’s fought for everything he’s got and that rubs off on us.

Liverpool defender Dejan Lovren is confident he can handle the threat of Real Madrid’s Cristiano Ronaldo in the Champions League final on Saturday.

“All the players are very similar. We’re a hard-working group that wants to be successful. We’ve all come together and that pays off.

“If we can get one more game with that attitude then hopefully we’ll be champions of Europe.

“It’s what the lads are all dreaming of, but we know how hard it is going to be and what a task it is in front of us.

It’s been an incredible season, full of ups and downs, hard moments and very high moments, but hopefully we’ve got one more high moment left in us.”