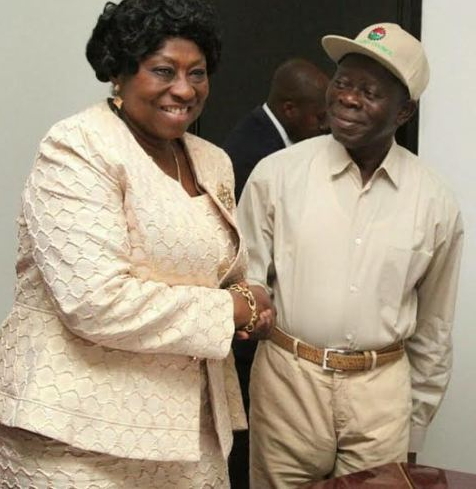 The despicable conduct of embattled National Chairman of the APC, Adams Oshiomhole sums up the mess that the APC Federal Government has dragged the country into. Nigeria is in a big mess.

This mess has been made worse by the fact that the APC Federal Government imposed on the nation a man without conscience and respect for human lives as National Chairman of a sinking ship.

Without equivocation, Adams Oshiomhole is a personification of the failure of the Buhari administration. He was invited by the APC Federal Government to lead the movement for the clutching at straws in the face of impending defeat in 2019.

Under the leadership of the APC Federal Government the nation’s security infrastructure has been damaged completely. The Security Infrastructure of Nigeria is no longer functional. Our security agencies have been politicised and turned into an APC salvation structure.

I was appalled by statements credited to the embattled National Chairman of the APC on the security tragedy in Benue State. But I was not surprised. Oshiomhole lives for inordinate relevance. He talks without reasoning as long as he gets media mileage.

To say it mildly, Oshiomhole’s allegation against Governor Ortom as it relates to Benue killings is childish. It is very reckless. However, it is vintage Oshiomhole. Always clothed in badluck as his South-South colleague would say. I have a fair knowledge of Benue State and the middle-belt. So I know the extensive damage that these Fulani terrorists have caused in the last three years.

If Oshiomhole in his straw-clutching game wants us to believe that Governor Ortom is the cause of the Benue killings by Fulani herdsmen, who is responsible for the killings by the same herdsmen in Plateau, Nasarawa, Kogi, Adamawa, Kaduna, Kwara, Enugu, Edo, Taraba, Ekiti, FCT and Bauchi States?

Who is responsible for the killings by the bandits in Zamfara, Kebbi, Sokoto and the waned killings by Badoo cultists in Lagos State?

I don’t want to talk about the rise the wave of Boko Haram attacks in Borno and Yobe States. Will Oshiomhole blame Governor Ortom for the collapse of security across the country?

Aside the unprecedented killings of Nigerians in 18 States by Fulani herdsmen, bandits, Badoo Cultists , there are increased cases of mass kidnapping and armed robbery in some states of the South-West, South-South and South-East. As a result, under the failed APC Federal Government, soldiers have been deployed to 22 States of the Federation to help maintain internal security without much success.

Blaming Governor Ortom for the failure of the nation’s security infrastructure is ridiculous. The governor has no control over the Army, Police, Air Force, Civil Defence, Navy or the para-military organisations. The Failed APC Federal Government is in-charge of these security agencies, but is comfortable blaming governors who have no control for the insecurity across the country.

It was on this premise that Zamfara State Governor, Abdulaziz Yari resigned as the so-called Chief Security Officer of his state. There is no worse indictment of the failed APC Federal Government than this action from a major national leader of the APC.

Our security forces are now mere intimidation agencies. They have left their constitutional responsibilities, using weapons of national defence to horrify political opponents of the failed APC Federal Government .

The disheartening drama at the residences of Senate President Bukola Saraki and Deputy Senate President Ike Ekweremadu highlighted the sad reality of this era. The desecration of the security architecture is the worst disservice to the nation.

From the South-South through the South-East, South-West and all the three geo-Political zones of the North, there is no major project by the APC Federal Government to stimulate the economy. Every single project commissioned by the Failed APC Federal Government was initiated and funded by the immediate past Jonathan administration. This administration has nothing to show for three years of expending over N25trillion and several billions of dollars borrowed from foreign sources.

Like the Minister of Labour, Dr Chris Ngige noted, the embattled National Chairman of the APC, Adams Oshiomhole is ignorant of the process of governance. Oshiomhole only understands the combative nature of the motor park, where name-calling and assassination of character are highly regarded. Governance is too serious a business for a small mind like Oshiomhole. He thinks that he can circulate the ‘go and die’ model he used in Edo State. It won’t function at this bigger stage.

The presence of Oshiomhole is a beautiful sign that Buhari will be sacked in 2019. His outbursts will continue to underscore all the evils associated with the Failed Failed APC Federal Government. He was brought to intensify the lies of the APC. This is 2018 and not 2015 when lies profited the APC. Now the truth will make Nigerians free from the shackles of the Failed APC Federal Government. Oshiomhole’s criminal clutching at straws will only hasten the send forth of Buhari to Daura.

Re: Ikpeazu’s low performance and quest for re-election -John Okiyi...