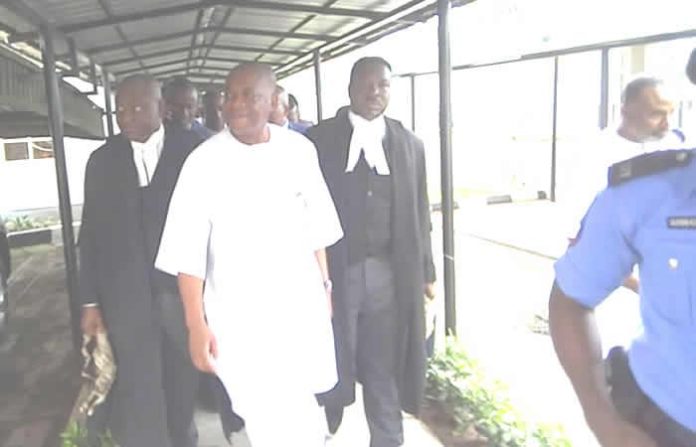 Muhammed Idris, judge of the federal high court in Ikoyi, Lagos, on Tuesday, dismissed a no-case submission filed by Orji Uzor Kalu, a former governor of Abia state, in his bid to stop his trial over an alleged N3.2bn fraud.

Kalu alongside his former commissioner for finance and account, Jones Udeogu, and a company, Slok Nigeria Limited, are being prosecuted by the Economic and Financial Crimes Commission (EFCC), on an amended 39-count charge bordering on money laundering to the tune of N3.2bn.

The EFCC, through its counsel, Rotimi Jacobs, had on May 11, 2018, closed its case against the defendants, after the conclusion of evidence given by Chidi Chukwuku, a prosecution witness, deputy director, Nigeria Deposit Insurance Corporation, NDIC

During the proceedings, the prosecution counsel had also moved an oral application to amend the charge against the defendants in view of the evidence given so far.

However, the defence led by Awa Kalu had on May 28 filed a no-case submission on behalf of their clients, which they subsequently adopted as their written address.

The judge, in his short ruling on the no case-submission today, held that the prosecution had established a prima facie case against the defendants based on the evidence against them.

He also held that there was a link between Kalu and the two others.

“You have explanations to make,” he had said.

Following the ruling, Goddy Uche, one of the defence counsel, informed the court that the lead counsel to the defendants had written to notify the court that Kalu has an appointment to undergo a surgery abroad.

He, therefore, prayed the court to adjourn the matter till September 10, 2018 to enable Kalu open his defence.

Jacobs, in his response, urged the court to adjourn further proceedings to the first week of September, saying that “the president of the court of appeal has directed that the matter must be concluded before the end of September 2018.”

Idris adjourned the case till September 10 for the defendants to open their defence .