Home FEATURED The Revolt of the Wicked: OUK ,Amaechi and ALEX Otti 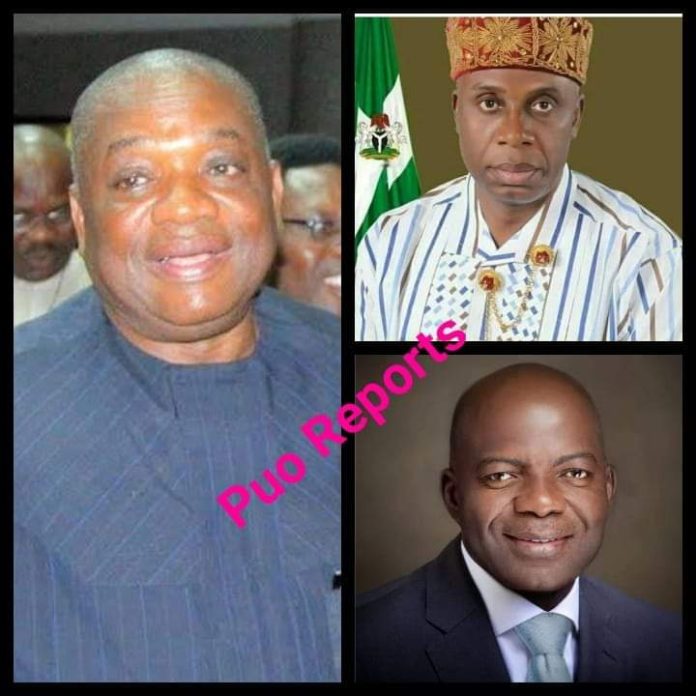 Abia is faced with multidimensional challenges at present due to the leadership and developmental damages done to the State by the 8 years of Orji Uzo Kalu as Governor.

In order to maintain a hold on the State, OUK has surreptitiously under the cover of his dark minds entered into an alliance with Alexander Otti to buy back the State which he lost to Ochendo. Alex Otti remains the factional Governorship candidate of APGA for this near term elections. However, Alex Otti recruited Senator Adighije to intervene and secure the support of OUK at a very high fee which includes giving OUK and the Senator 10% of monthly revenues that will accrue to Abia State if he is elected Governor with OUK’s behind the scene support. OUK who has been deceived and abandoned before by Ochendo provided his personal “alusi” which Otti gladly swore to as a mark of allegiance to OUK.

They duo also agreed to work for each other separately to achieve their goals of winning their respective elections.

In the meeting, Otti also swore to support OUK in his Presidential bid by 2023 if OUK helps him win by working against Uche Ogah who is the candidate of OUK faction of APC in Abia.

Sen. Adighije as the devils incarnate provided the forum for OUK and Otti to meet clandestinely and conclude this evil plan against Abians. OUK fathoms this plan as a proper channel towards recovering relevance and financial capture of the State since, Ogah the factional APC Governorship candidate in the State, had severally refused to swear to this “alusi” upon his instigations in the past.

With this development, OUK feels he has comfortably sold out Ogah by this deal with Otti. OUK is making similar moves with ikpeazu though it has not materialized yet because ikpeazu knows his nature better than Otti.

Sen. Adighije has always insisted that Ogah cannot be loyal to anyone as a governor because of his strong Christlike nature and wealth.

In the other hand, Chief David Burdex, who is also a very strong contender to OUK, is feeling so betrayed by Otti, as he was heard recently, complaining to some of his closest followers, on how Otti has completely sold out because of his new marriage with OUK. He said, he has never seen such an insatiable and selfish man as Alex Otti.

We are of the opinion that all the while, there has been a close tie between OUK and Otti, as the duo also partnered in some dirty deals during the Diamond bank days.

It is also not a secret that Rotimi Amechi is doing everything to reward Alex Otti for helping him collapse Diamond Bank into Access which is own by Amechi. Otti, destroyed Diamond bank just for a selfish end. His dream of taken over Abia State at all cost has led him into doing a lot of wrongs and going into evil agreements.

Amechi wants to be President by 2023, and a such, he is doing all to buy over some States in 2019 election and Alex Otti is a willing tool for Abia, even when it’s obvious he will reduce Abia to the zero ground.

Otti is now playing 2 Presidential aspirants in a bid to foster his ambition, making promises wherever he goes. That is the height a desperate Otti can go.

We warned our brother Uche Ogah that his relationship with OUK lacked every reason including being perfect but he would not listen because we are not in the same political party.

All men of conscience in Abia State should beware of OUK. He is very diabolic and wicked and will revolt against anyone for his voice alone to be heard.

Dethronement: ‘I accept my removal with sweetheart’ – Sanusi