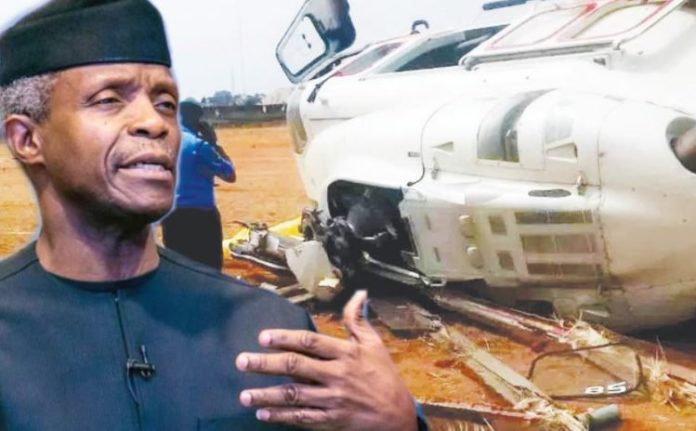 ……Attributes crash to effects of landing in dusty environment

The AIB attributed the February 2, 2019 crash of the Chopper marked with registration number 5N – CML to effects of a brown out generated during its landing in a dry dusty environment.

It said Caverton should have carried out risk assessment test at the Kaaba stadium before the flight.

Brown out in aviation par lance means a condition generated during landing in a sandy, dusty environment.

The chopper operated by Caverton Helicopter occurred at Kaaba Stadium in Kogi State. It flew Osinbajo his entourage and three crew members.

The chopper was manufactured in 2012.

Speaking at a briefing at its headquarters at the Murtala Muhammed International Airport, Lagos, AIB Commissioner and Chief Executive Officer, Akin Olateru said though the investigation into the crash is ongoing, it has however issued two safety recommendations to the Nigerian Civil Aviation Authority (NCAA) and the operator : Caverton Helicopters Limited.

Olateru said the NCAA should issue advisory circular to helicopter operators on the effects of brown out and how to mitigate its effects.

The second safety recommendation, Olateru said is for Caverton Helicopters to carry out proper risk analysis and assessment before operating flights into unapproved landing pad.

He said the final report on the accident will be released in few months.

I can’t be freed legally, Buhari govt planning to eliminate me...