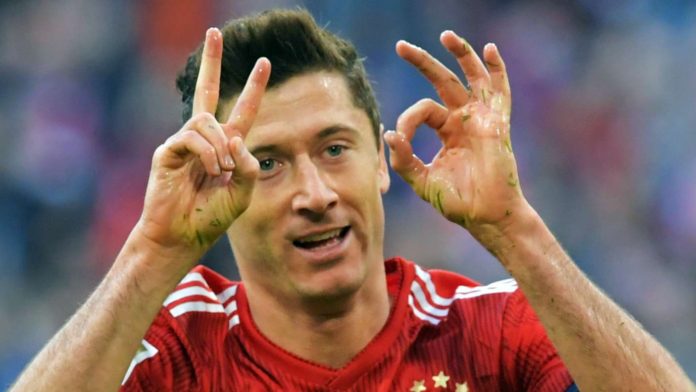 The Bayern Munich striker was back among the goals against Borussia Dortmund, reaching a double century and haunting his former club once more.

The Poland international has been a prolific presence throughout his time in the German top flight.

He was first acquired by Dortmund in 2011 and found the target on 103 occasions for them, including 74 efforts in the league.

But he moved across the Bundesliga to BVB’s rivals in 2014 when Bayern snapped him up on a free transfer.

Lewandowski has since taken his strike rate to even greater heights at the Allianz Arena.

He has recorded 40-plus goals across three successive seasons and could yet hit that mark again in 2018-19.

A 34th effort was recorded during a Der Klassiker clash with Dortmund on Saturday.

His clever finish doubled Bayern’s advantage on the day, following Mats Hummels’ opener, and took him to 20 Bundesliga goals for the season and 126 in total for the Munich giants.

Having reached a double century across his time in Germany, only World Cup-winning legend Gerd Muller can claim to have hit the same point in fewer games that Lewandowski.

There is the promise of many more to come from Lewandowski.

He is tied to a contract until 2021 and has suggested that he could see out his playing days in Bavaria .

His former employers at Dortmund will be hoping that is not the case.

While they once benefited from his undoubted ability, they have been haunted by it in recent times.

Lewandowski also claimed another slice of Bundesliga history with his efforts against Dortmund.