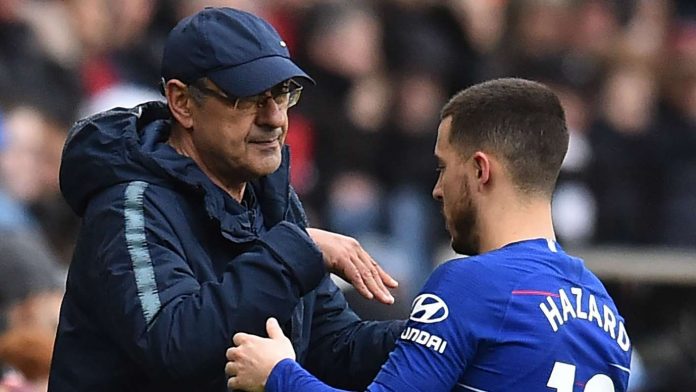 The Chelsea boss insists the Spanish giants will need to spend big if they want to land the Belgium forward.

Maurizio Sarri believes Eden Hazard is worth more than £100million but said Chelsea will respect his wishes if he wants to leave for Real Madrid.

Belgium international Hazard struck a brilliant brace, including a sensational solo opener, in a 2-0 victory over West Ham on Monday that lifted Chelsea to third in the Premier League.

Widespread reports claim Chelsea will ask for £100m in order to relinquish their prized asset, but the club’s head coach expects more for a near-irreplaceable attacker.

“We have seen every price in the last few transfer windows. I think it’s very hard to change Hazard with another player.”

However, with just over 12 months left to run on Hazard’s contract, Sarri conceded Chelsea’s hand may be forced if the 28-year-old decides it is time to leave London.

“I’m sure the club doesn’t want to sell him,” the Italian added in his post-match media conference.

“But, of course, we all have to respect his decision. He’s in the last year of his contract [next season]. If he wants to have another experience, we’ll respect that.

Asked whether Hazard has privately expressed a desire to leave, Sarri replied: “No, no. Not at the moment. He told me he has to decide.”

When asked about his future, Hazard insisted his sole focus was Chelsea between now and the end of the season.

The 28-year-old revealed in February that he had decided where he would be playing his football in 2019-20 , but refused to confirm whether that was at Stamford Bridge or elsewhere.

The former Lille forward has scored 19 goals in all competitions this season and claimed the Silver Ball at last year’s World Cup.