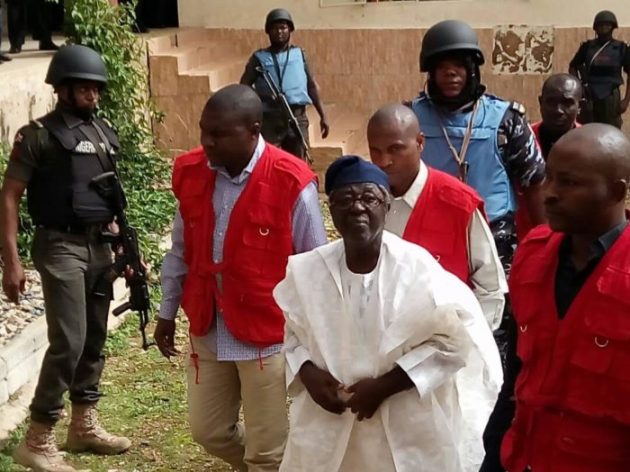 A witness, Mr Taiwo Olorunyomi, an investigator with the Independent Corrupt Practices and other related offences Commission (ICPC) alleged that former Governor Jonah Jang diverted N2 billion which the CBN released to the state government for Micro Enterprises and SME’s.

NAN reports that the EFCC on May 7, preferred a 12-count bordering on alleged corruption and misappropriation against Jang.

It alleged that Jang, who served as Plateau governor between 2007 and 2015, misappropriated N6 billion, two months to the end of his tenure as governor.

Being led in evidence by ICPC Counsel, Rotimi Jacobs, SAN, in a High Court in Plateau, Olorunyomi,said:”the CBN entered into a partnership with the Plateau Government to establish a state SME development Agency which would be the vehicle to disburse the funds and recover same.

NAN reports that the EFCC alleged that Jang embezzled the money through Mr Pam Yusuf, then a cashier in the office of the Secretary to the State Government.

“We discovered that when the money was released, it went to the Plateau Project Account instead of the SME project.

” The money again was later moved into another account.

“In our investigation we discovered that the money was used for classified expenditure, an expenditure that has no document to prove how it was expended.

“The defendant (Jang) to our amazement in his statement told us that he did not know what classified expenditure meant.

“From our investigation, the said money is still with the defendant,” he told the court.

He said that Jang stated that the money was borrowed from the account to pay contractors, fund other liabilities in the state and for ‘classified expenditure’.

The witness said that the second defendant (Pam) withdrew the said amounts in cash and delivered it to the first defendant (Jang) stating that their action hindered the activities in SUBEB at the time he was governor of the state.

Also, Jacobs while presenting the second witness, the Secretary to the State Government of Plateau and tendering the statement of the second defendant prayed the court to accept documents tendered by the witness.

Counsel to Jang, Mike Ozekhome, SAN, however objected the prayer, stating that the prosecution did not present him with the documents before sitting and therefore could not present same to the court, describing it as an ‘ambush’.

Ozekhome prayed the court to reject the calling of the witness and accept the statement of the second defendant as he was not served with the documents before the court sitting.

The judge, Justice Daniel Longji, in his ruling, held that a party must not be taken by surprise especially in a criminal case.

Longji held that if one must present a document as exhibit, the defence must have the document.

He adjourned the matter until April 11, for continuation of hearing.