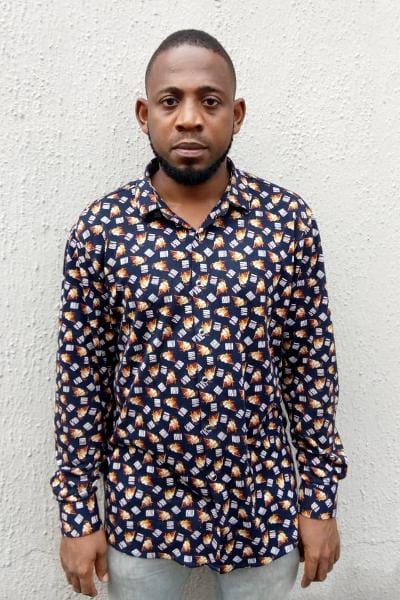 The Economic and Financial Crimes Commission, EFCC, Port Harcourt’s Zonal Office on Thursday, April 11, 2019 arraigned Uchenna Samuel Nwosu (a.k.a Jackson mendez, Reagan Philips Jackson) before Justice I. M. Sani of the Federal High Court sitting in Port Harcourt, Rivers State. He was arraigned on three-count charges bordering on internet fraud, impersonation and obtaining under false pretences contrary to Section 6 of the Advance Fee Fraud and Other Related Offences Act, 2006 and punishable under section 1(3) of the same Act.

One of the count read: “That you UCHENMNA SAMUEL NWOSU (alias Jackson mendez) on or about February 2019, in Port Harcourt, Rivers State, within the jurisdiction of this Honourable Court had in your possession (your email address: jacksonmendez180@gmail.com) documents containing false pretence which you knew or ought to know, contains false pretence and thereby committed an offence or an attempt to commit an offence contrary to section 6 of the Advance Fee Fraud and Other Related Offences Act 2006 and punishable under section 1 (3) of the same Act”.

He pleaded not guilty to the charges when read to him.

In view of his plea, prosecuting counsel, Samuel Chime, prayed the court to fix a date for trial.

However, defence counsel, O. E. Okpara informed the court of an application for bail for his client. The application was honoured by the court and Justice Sani granted the accused bail in the sum of N10,000,000 (Ten Million Naira) only and one Surety in like sum.

The Surety must have a landed property within the jurisdiction of the court. The Surety’s Certificate of Occupancy (C of O) must be verified by the Court Registrar and a letter by the Permanent Secretary of Ministry of Lands confirming the authenticity of the C of O. Also, the Surety must provide a verifiable address and two passport- sized photographs.

The judge also ordered that the accused be remanded in prison custody, until he meets the bail conditions. He adjourned the matter to May 10th, 2019 for trial.

Nwosu ran into trouble when he was arrested along Liberty Drive, Woji, Port Harcourt, for his alleged involvement in online dating scam. Specifically, he allegedly impersonated an American soldier in Syria to defraud Carmen Alvarez, an Americal lady of $500, being a part payment of $2,350 he requested from her in an online chat.