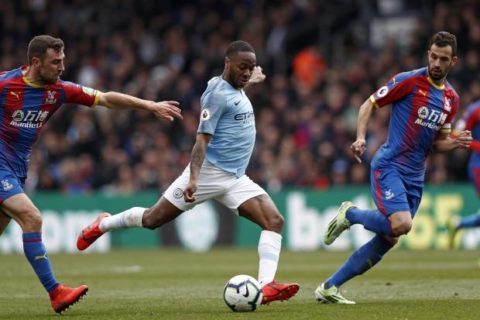 Raheem Sterling was the hero as Manchester City recorded a 3-1 win at Crystal Palace on Sunday.

Sterling scored twice to guide his team to a ninth successive victory in the league.

The England forward netted his goals in each half as Pep Guardiola’s men move closer to retaining the title if Liverpool slip against Chelsea at Anfield.

Sterling scored the first goal in the 15th minute and doubled it in the 63rd minute.

City had to endure some nervous moments in the final minutes as Palace captain Luka Milivojevic struck with a free-kick, but a last-minute goal from Gabriel Jesus, who was set up by De Bruyne, sealed the win.

The result puts City back on top of the table, but Liverpool would climb back to top spot if they beat Chelsea, having played one game more than City.

‘Back together’ – Neymar welcomes Messi to PSG

Mourinho: I miss coaching but will only return for the right...