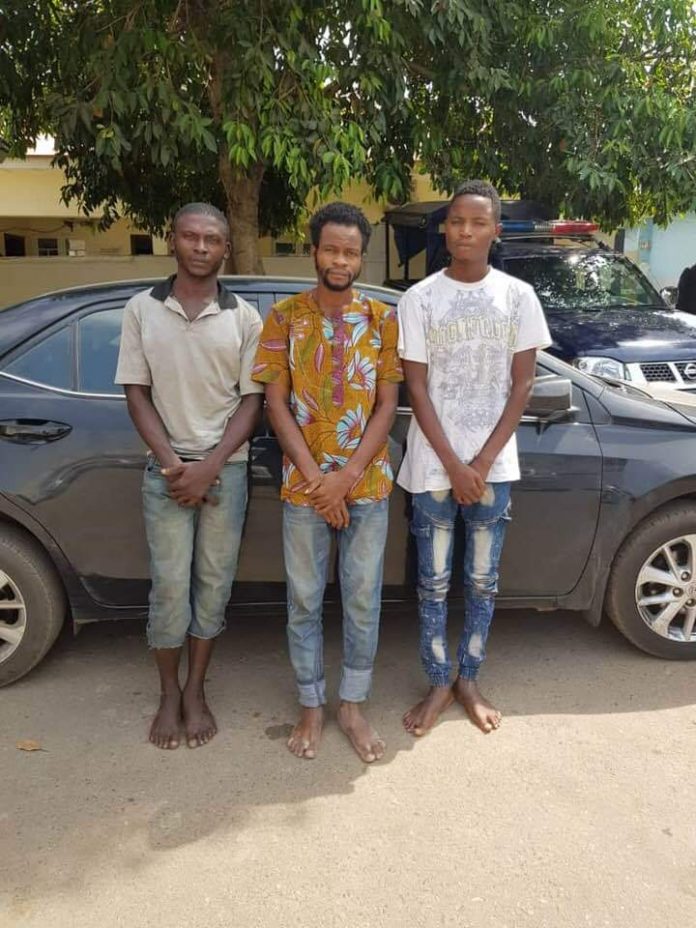 Three members of a notorious robbery gang, which specialized in snatching vehicles from women driving expensive cars around the Federal Capital Territory, FCT, Abuja, and smuggle them to Niger Republic, have been arrested by operatives of the Inspector General of Police Special Intelligence Response Team, IRT.

Vanguard gathered that the suspects who were identified as Ego Ike, Obinna Igwe and Adamu Nuhu, were all arrested recently from their hideouts in Abuja and Kaduna State, after they robbed a female staff of the Federal Inland Revenue Service, FIRS, of her vehicle, while on her way home from work.

The suspects, were said to have driven the robbed vehicle, a 2016 Toyota Corolla, belonging to the FIRS staff, to Kastina State, before it was smuggled into Niger Republic. The suspects however ran out of luck when some Nigerien Policemen, accosted them and suspected that the vehicle may have been stolen from Nigeria and smuggled into Niger Republic. The therefore impounded the vehicle and arrested a member of the gang identified simply as Yellow, while Ego Ike, Obinna Igwe and Adamu Nuhu, escaped back into the country.

Meanwhile, the FIRS staff and other women whose vehicles have been robbed by members of the gang made complaints to the police authorities in Abuja while Inspector General of Police, Adamu Mohammed, directed his operatives at the IRT, headed by Deputy Commissioner of Police, Abba Kyari, to fish out the bandits.

Sources disclosed that a crack team was deployed to investigate the matter and had interviews with some of the victims who provided information that aided the operatives in apprehending three members of the gang, leaving behind the ring leader, identified simply as Linus, who is still on the run.

It was gathered that the suspects confessed to the crime during interrogation and explained that they targeted women because they get scared easily and can’t put up stiff resistance as men. The suspects also disclosed that most of the vehicles they robbed were mainly Toyota products because the demand for them was on the high side.

I went into crime because I lost all my life earnings on gambling.

30-year-old Ego Ike, who is a native of Anambra State, said he went into crime because he lost the N6million he was using to run his clothing business to gambling. According to the primary school dropout; “I was formerly a spare parts dealer at the Ladipo market, Lagos, but I moved to Abuja in search of greener pasture and when I couldn’t find my bearing, I pressured my father to sell his only land in the village and he used the proceeds to send me to Istanbul, Turkey. I stayed in Istanbul for three years where I worked and saved close to N6milion. Then I started importing clothes into Nigeria, I was supplying several shops around Abuja and Lagos but in 2016, one of my friends introduced me to Naija bet, a sport betting game and I lost all my money there. My resident permit in Istanbul got expired and I had no money to renew it. I became frustrated, then I met Linus in one of my brothers’ place in Jabi area of Abuja and we became friends. He introduced me into an armed robbery gang which had Obinna and Yellow. We stole a Toyota Rav4 from a woman who was driving into her house in Shafar Road, Abuja, took the car to Kaduna and gave it to Nuhu who offered to pay N200,000. We also accosted another woman in Buhari area of Abuja, who was driving a Toyota Matrix and stopped in front of a shop to buy something. We snatched the car from her and took it to Kaduna and we were paid N270,000. We didn’t know that the woman who owned the Toyota matrix works with the Federal Road Safety Corp. The third car we stole was also from a woman who was driving a Toyota Corolla Sport, at Kado Estate in Abuja. We used Yellow’s car to block the woman’s car and collected the car from the woman. We took the car that night to Niger Republic. But at the Kastina border, Linus and I came down from the car, took a bike and crossed into the country while Yellow and a man who I don’t know took the car into Niger Republic but Nigerien police stopped them and arrested them. We target women in our operations because we don’t use guns and women are easy catch as most of them are not security conscious. We target Toyota cars because they are easy to sell and the demand for them is on the high side.”

I went into car theft when I was 17-year-old.

On his part, 19-year-old Adamu Nuhu from Kaduna State said; “I attended only primary education, I was 17 years old when I started stealing cars. There was this man known as MD who I met when I was selling phones in Kaduna State. MD was one of my customers who normally bought phones from me. In 2017 when I was attacked by armed robbers and all my phones were stolen, I was stranded. I then approached MD to assist me because he was always having money with him. MD then told me that since I knew how to drive, he would be giving me cars to deliver for him to several states and he was paying between N30,000 to N40,000. Later, MD gave me a master key and showed me how to use it. The first car I stole with the master key was a Toyota Karina which I sold to one Mohammed Garuba in Kaduna for N120,000. I stole three other Toyota Camry cars from the market at Tuniga Maji area along the Kaduna Abuja expressway and I sold them to one Alhaji in Sokoto State for N420,000 MD also gave me four Toyota Corolla cars to deliver to one Abudul who is an intermediary between car thieves in Nigera and receivers in Niger republic. Later in September 2018, Yellow introduced me to his own gang who were operating mainly in Abuja with guns. One of them known as Linus, who is yet to be arrested, called me and said he was coming from Benue State with some of his brothers who operate with AK47 rifles and they wanted to carry out a robbery operation in that state but they didn’t know the terrain. Ego who was a member of the gang also called me and while I was waiting for them, the police showed up and I was arrested.”

Food vendor dies while rescuing a coworker from electric shock